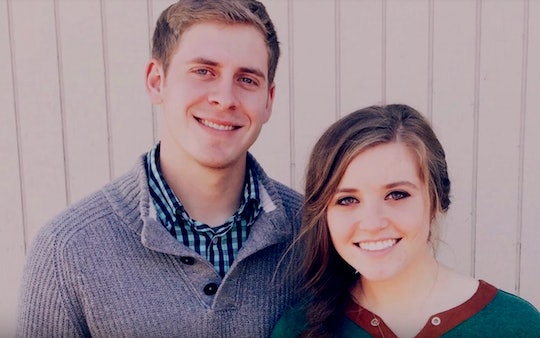 TLC's Counting On took a hiatus at the beginning of October after the season finale aired. But not to worry: the Duggar family has been staying active on social media, continuing to update the ever-expanding brood's fans about their lives. The most recent update? Some adorable photos of Joy-Anna Duggar's baby boy Gideon posing with a baby pumpkin.

The great Duggar baby boom of 2018 was nothing short of exciting. This year, three of the Duggar siblings — Joy-Anna, Jinger Vuolo, and Joseph Duggar along with wife, Kendra — all welcomed their own respective first children into the world, according to Us Weekly. And on Feb. 26, Joy-Anna was the first to give birth to her son, Gideon Martyn, whom she shares with husband, Austin Forsyth, according to E! News.

In the past eight months since Gideon's birth, fans watched Joy-Anna's struggles and successes with motherhood on Season 8 of Counting On. And her most recent photo of her son shared on Instagram on Wednesday shows just how happy she is to be a mom to her little boy — and what a happy baby he is!

In the photos, 8-month-old Gideon can be seen posing with a baby pumpkin with the biggest smile on his face. And in one photo, Gideon even tried to eat the pumpkin... because, babies, right? Honestly, this little boy looks so happy, these photos will put everyone in the mood for fall.

Not only does Gideon look so excited to be in the midst of fall foliage, but fans in the comments of the photo series seem to think that he looks exactly like his dad. (And yup, they're totally right.)

"He looks just like his daddy!" one fan wrote.

"Awww...such a happy little guy!!," one more stated. "There's no denying who his daddy is."

Even Joy-Anna seems to agree. In August, for instance, she posted a baby photo of Austin next to Gideon and the resemblance is uncanny. "I'd say they look alike!," Joy-Anna captioned the sweet photo.

All comparisons aside, Gideon looks like such a fun and happy baby. But, during an episode of Counting On in September, Joy-Anna revealed that motherhood has presented its fair share of struggles to her. According to People, Joy-Anna said in the episode:

Being a mom is in a lot of ways easier than I thought and then in a lot of ways, harder than I thought. I knew that my mom had gone through a lot with all of us kids, but I didn't think it was that hard just because I had always taken care of kids myself. But it's given me a whole new appreciation for moms out there who have kids.

Sure, by having 19 brothers and sisters, Joy-Anna is used to babies being in the house and having to help take care of them. But raising a kid with a spouse is a completely different ball game. It's awesome that Joy-Anna is comfortable in sharing the not-so-glamorous side of motherhood with her fans and followers, as well as these super adorable looks at life with her baby boy — baby pumpkin and all.