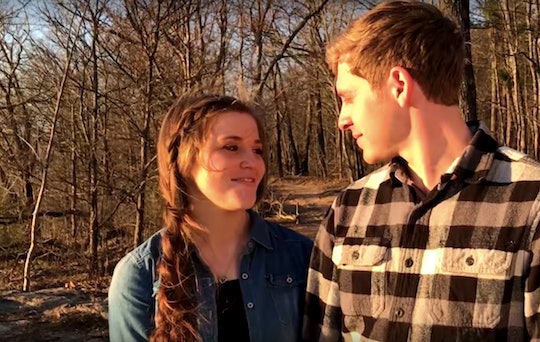 Joy-Anna Duggar's Baby's Name May Have Been Revealed, Thanks To Wikipedia

There has been a lot to keep up with regarding reality television families these days, and I'm not just talking about the Kardashians. There are three members of the Duggar family who are currently expecting their first children, with one daughter's due date just around the corner. Although the Counting On star has yet to announce her baby's birth, the name of Joy-Anna Duggar's baby may been revealed already. And it's all thanks to Wikipedia.

Joy-Anna's pregnancy news was revealed in August 2017, just three short months after she and husband Austin Forsyth tied the knot in May of that year. "We’re so happy and thankful to announce that we’re expecting a baby!" Joy-Anna told People at the time. "Every child is such a precious gift from God. I’m most looking forward to watching Austin as a dad and raising children together with him."

Fans were quick to question the timeline of Joy-Anna's pregnancy, considering how soon her pregnancy news came after the couple's wedding, sparking rumors of a shotgun wedding, which would have gone against the Duggar family's strict courtship rules. But Joy-Anna has basically ignored all of those ~*theories*~, as has her family.

But now, there's a new theory circulating surrounding Joy-Anna's pregnancy thanks to a now-deleted entry on the Duggar family's Wikipedia page, According to The Hollywood Gossip and In Touch Weekly, the Duggar family's Wikipedia page noted that Joy-Anna welcomed a daughter named Julie. Romper's request for comment from TLC regarding the alleged name entry on Wikipedia has not yet been returned.

Of course, as anyone could alter a Wikipedia page, this name theory about Joy-Anna's still unborn child is not a solid one. But that doesn't mean that this possible baby name slip didn't mean something. For starters, the name Julie would certainly fall in line with all of the Duggar J names. And, only one week ago, Joy-Anna and Austin's joint Instagram account informed fans that her due date was Feb. 22, 2018, which ultimately matched up with another theory that all started on an Amazon baby registry.

Which, in case you aren't watching your calendar, is like right around the corner y'all. So, Joy-Anna could very well have already given birth shortly before her due date and there was just some kind of mix-up over on the family's Wikipedia page. Or, it could have been an eager fan entering in their best theory. Whatever actually happened, fans will likely find out sooner rather than later if Joy-Anna and Austin's first child will actually be a baby girl named Julie.

Although Joy-Anna has not yet revealed her baby's sex or the name they've chosen, she has kept fans informed about her pregnancy. After sharing a sweet photo revealing Joy-Anna's pregnancy on Aug. 30, 2017, she shared the first photo of her bump in October. "Can't wait to meet our baby!! I got to feel it kick for the first time a few days ago!!!" she wrote at the time. "Soooooo amazing!!! It's already about the size of a bell pepper and weighs around half a pound!!!"

With her due date literally around the corner, fans will learn soon enough whether or not the baby name briefly listed on Wikipedia was accurate, especially considering how open she's been with updates thus far. Julie is a cute name, but whatever they end up choosing for their baby will certainly be just as sweet.