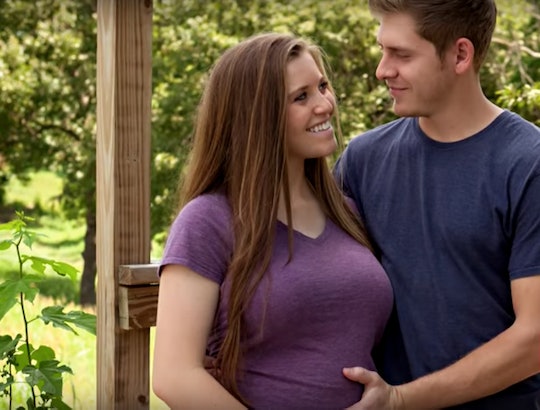 Joy-Anna Duggar's Pregnancy: A Timeline Of Her Journey To Motherhood

There's a bit of a baby boom happening in the world of reality television families at the moment, but especially so in the ever-growing Duggar family. And with one 20-year-old Duggar daughter due to give birth in just a matter of days, this timeline of Joy-Anna Duggar's pregnancy will take you back to where it all began. Joy-Anna's pregnancy journey has been well-documented, so there are plenty of moments to reminisce on as fans wait for her and husband Austin Forsyth to welcome their first child later this month.

Joy-Anna's pregnancy has been one for the ages and fans of the family have definitely been thrilled to watch her as she starts a family of her own. While her pregnancy news was certainly met with much excitement from fans, it seemed only natural that she'd have kids shortly after she married Austin last year. After all, as family matriarch Michelle Duggar once said during an interview with TODAY in 2011, their family motto is that "there’s always room for one more." And with baby Forsyth on the way, Joy-Anna is certainly living by that motto.

So with her due date just days away, let's take a walk down memory lane and remember where Joy-Anna's pregnancy journey began, because time certainly does fly.

After a nearly 15-year long friendship, Joy-Anna and Austin tied the knot in May 2017. They'd been engaged for three months and actually changed the date of their wedding to be sooner than originally planned, causing many to wonder about just when Joy-Anna got pregnant. Nevertheless, the wedding date in May is a definitely known, as it aired on the TLC show, Counting On, in June.

After their wedding (and first kiss), the couple went on their honeymoon, of course! Speaking to People, Austin explained what plans they had for their special trip. "We are currently in Geneva, Switzerland, and over the next few days we’re going to be traveling to Interlaken and Zurmatt," he told the magazine on June 9.

Could this have been when the newlyweds conceived their baby-to-be? After all, honeymoon babies are definitely a thing for a reason, y'all.

On Aug. 30, 2017, Joy-Anna and Austin announced that they were expecting their first child together, just three months after their wedding. Now, considering that it happened so soon after the wedding, many wondered if the happy couple had jumped the gun, so to speak, and gotten pregnant out of wedlock. But, if Joy-Anna wanted to wait until she was past her first trimester to announce the news, then it would simply mean that the two conceived their baby sometime around their honeymoon.

Now, the world waits. With a due date inching closer and closer, fans are anxiously awaiting the arrival of little baby Forsyth. With so much speculation surrounding her due date, Joy-Anna uploaded a photo to Instagram with the hashtag, #9daystillduedate, which would make her due date Feb. 22.

There are still some things fans have been curious about, though. For example, there were reports that Wikipedia listed the name of Joy-Anna's baby as a daughter named as Julie, though she has not yet revealed the baby's sex or name. So, it seems as though fans will just have to keep on waiting for Joy-Anna's birth announcement to confirm everything thing they've been wondering about for the last nine months. Just like every update so far, this one will also come when the time is right.