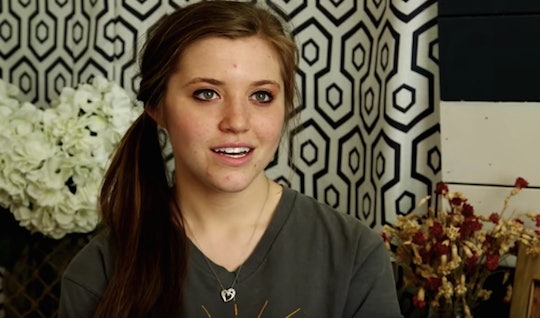 Shortly after Joy-Anna Duggar announced her first pregnancy in August, many fans came forward to question the timeline of her exciting announcement. From Duggar's supposedly big bump size in her announcement video to her absence at the Duggar family's Thanksgiving dinner, just about every Counting On viewer has a so-called clue that "confirms" the persistent rumor that she had pre-marital sex with her husband, Austin Forsyth. In fact, there are some fans out there who think Joy-Anna Duggar has already given birth. So, are the rumors true? Well, if this new Instagram video of Joy-Anna Duggar shading her haters is any indication, the answer is a resounding no.

On Thursday, Duggar took to Instagram to give fans a tour of her new home with Forsyth. The video, which Duggar began with a cheery "Hey, y'all!," showed off all of the renovations Forsyth has made to the couple's Arkansas abode, including their updated kitchen and newly decorated master bedroom.

Although it's always enjoyable to witness home improvements in the making (shoutout to all the HGTV fans out there), the truly interesting part of the video was when Duggar stopped midway through the tour to show off her bump in a full-length mirror. “I’m still very pregnant," Duggar confirmed to her followers as she flaunted her visible bump in the mirror, according to Instagram.

OK, so did anyone else notice Duggar's emphasis on the word, "still?" Honestly, I wouldn't have thought anything of this video if she hadn't made it a point to reiterate to her fans that she's still pregnant. In my humble opinion, Duggar totally took aim at the fans who continue to harass her about whether she has already given birth.

And as it turns out, many fans agree with my take. One of Duggar's followers wrote: "My favorite part is her saying 'and I am still very pregnant.' It’s a very nice way to let all these people that are saying she got pregnant before wedding know it’s not true." Another person chimed in: "Love that you showed and said you were still pregnant! Hopefully that will shut the people up saying you're in hiding because you already had the baby."

Although Duggar doesn't have to prove anything to her fans, it's nice to see her taking control of her own narrative and shutting down all the silly rumors. Because it goes without saying that it's not fun to deal with untrue rumors while you're carrying another human being, right?

Not to mention, it's obvious Duggar simply doesn't have the time to battle unnecessary nonsense as she prepares for her first child. As you might have noticed, the room for Duggar's baby is not yet complete and her house is still undergoing serious renovations.

In fact, fans might remember that Forsyth revealed in a September episode of Counting On that the couple's vaulted ceiling would take longer than expected due to safety concerns.

Forsyth explained, according to The Wrap:

If the laminated beam doesn’t get installed properly, the roof could collapse, especially if we get some snow on it.

So, yeah. It's safe to say Duggar has a lot going on right now.

The good news is Duggar has the support of Forsyth to get her through the fan backlash and grueling home renovations.

Most recently, Duggar penned a sweet note thanking Forsyth for his unwavering support, according to Instagram:

Austin, I’m so grateful for your sacrificial, Christ-like love. I know that through this pregnancy you’ve given and given so much to me and have never expected anything in return. Thank you for being my best friend! You are the greatest!!!!💋😘😍 I love you with all of my heart, honey!! -your girl #sohandsome #besthusbandever.

Of course, Duggar doesn't necessarily "need" Forsyth to get through the difficult moments in her life. It's quite clear that Duggar has no problem handling the haters all on her own.