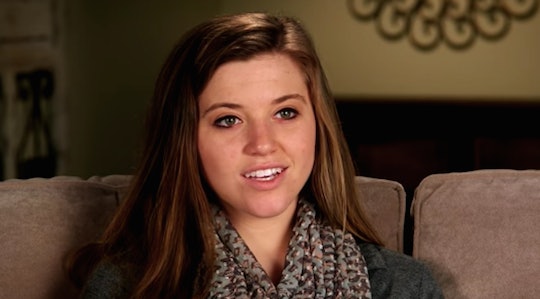 For months now, fans have speculated about the timing of Joy-Anna Duggar's pregnancy news. Some people suspect that Joy-Anna and her husband, Austin Forsyth, conceived before their wedding in May, which would be shocking given the Duggar's ultra-conservative values. From so-called clues like Joy-Anna's bump size to her absence from the Duggar family's Thanksgiving festivities, some Counting On viewers are convinced that there's something suspicious about her pregnancy. And just when you thought the speculation couldn't get any more ridiculous, some fans are theorizing that Joy-Anna Duggar gave birth early. Considering Joy-Anna is due in February, the new fan theories are a bit of a leap, to say the least.

On Saturday, Joy-Anna posted a nondescript photo of herself and Austin to Instagram. The couple appear to be flying in a plane, and Austin's dad, Terry Forsyth, is seated in the back of the aircraft.

Heading down to Mississippi for a wedding!✈️👰🏼.

At first glance, this is a totally innocent and run-of-the-mill photo. There's nothing odd or amiss about a family flying to a wedding, right?

Unfortunately, some fans took the opportunity to question whether Joy-Anna has already given birth and the fan theories are pretty absurd.

Fans were quick to wonder why the picture didn't show off Joy-Anna's bump, because a no-bump pic must mean she's hiding something, obviously. One fan asked: "Why no baby bump shot?"

I've never flown in a small plane before (nor do I even plan to), but I imagine it would be difficult to take a full body selfie in a teensy aircraft. Plus, a bump shot would have likely cut Austin out of the photo entirely. So, the idea that Joy-Anna is concealing a birth simply based on the angle of the photo is pretty out there.

But wait, the speculation didn't stop there.

Many people brought up Joy-Anna's appearance as proof that she has already given birth. Apparently, Joy-Anna doesn't even "look" pregnant, a sentiment I'm particularly confused about. How does a pregnant person look, exactly?

One fan argued: "Joy doesn’t even look pregnant in this pic ... They are hiding something." Another added: "She doesn’t look pregnant at all here."

And when one commenter asked why Joy-Anna doesn't appear pregnant, another person replied: "because she already had it."

If you've been following Kylie Jenner's reported pregnancy, then this type of speculation should be familiar. Fans love to analyze Jenner's supposed pregnancy face, and some people have argued that Jenner is pregnant because of her "swollen appearance," for example.

And to be fair, pregnancy can change a person's face. Pregnancy can cause nose swelling due to higher levels of estrogen, according to Glamour, and it can also make the face appear puffy.

Although it's true that pregnancy can alter a person's appearance, it's still kind of lame and unfair to speculate about a stranger's face.

Following the rampant speculation about Joy-Anna's supposed non-pregnant look, other commenters came to her defense. A fan reasoned: "How can you say she doesn't look pregnant??? You can see an inch of her chest. No lower. There's no belly on show at allllll. God people love to create something out of nothing." Someone else chimed in: "She did not have the baby yet it's not due until feb."

Another person brought up how they were also accused of conceiving pre-marriage: "I got married in May, pregnant on my wedding night and had my daughter Feb 9 (three weeks early). My own family sat there and counted the days and accused me of the same ... People are always going to judge. Be the bigger person and walk away or ignore it."

So, the likely truth here is that Joy-Anna is still pregnant and will give birth sometime in February. Although some fans seem intent on concocting theories about her pre-marital choices, it's really no one's business. Joy-Anna totally deserves to enjoy her first pregnancy without having to deal with fan speculation and baseless rumors.