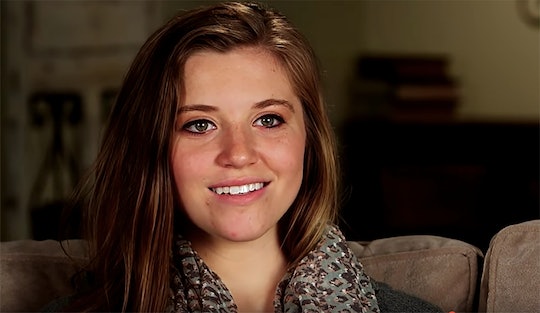 Out of all of the Duggar sisters, Joy-Anna Duggar might be the most private. She isn't one to divulge personal details, and she doesn't hit back at mom-shamers on the 'gram, unlike her older sister, Jessa Duggar. Unfortunately for curious fans, Duggar's desire for privacy also extends to her 4-month-old son, Gideon Forsyth. Duggar rarely shares photos of Gideon; in fact, it looks like she posts one photo of her baby every month. When you consider her sisters post pics of their children all the time, it's no surprise people get all sorts of excited when she shares a new snap. Which is exactly what happened on Wednesday, when Joy-Anna Duggar shared a new photo of Gideon and it's exceptionally cute.

When Duggar was pregnant with Gideon, she shared a fair amount of bump photos. It's fair to assume Duggar was more public during this time because there were a lot of rumors out there about her pregnancy, like the one that she and her husband, Austin Forsyth, had supposedly engaged in premarital sex. At the time, it seemed like Duggar was intent to prove her haters wrong — a mission she accomplished when Gideon made his debut on Feb. 23, 2018, about nine months following their May 2017 wedding.

Now that Duggar doesn't have anything left to prove, she's content to enjoy a mostly social media free life with Forsyth and baby Gideon. Duggar does break this trend, however, for special occasions. Case in point: On Wednesday, Duggar shared a photo of baby Gideon in celebration of Jim Bob Duggar's 53rd birthday. "Happy Birthday, Daddy!! We love you SO much!!" Duggar captioned a sweet snap shared on Instagram of Gideon posing on Jim Bob's lap.

Although Gideon looks super cute in every photo, this pic is particularly precious. From Gideon's tiny puckered lips to his surprised expression (it looks like he's not sure about the whole selfie thing), this photo is too sweet for words.

As it turns out, a lot of fans agree that this pic is one of Gideon's best.

"That is the cutest baby I’ve ever seen!!!" one person penned on Instagram.

"Sweet baby Gideon, he is adorable," a fan said.

"Happy Birthday! This little one is absolutely adorable," a commenter chimed in.

"@austinandjoyforsyth your son is your husband's twin for sure!" a commenter added.

Yep, I think it's safe to Gideon is a dead ringer for Forsyth. It's uncanny, to put it mildly, a sentiment they seem to agree with. "He's got Austin's nostrils," Duggar said, according to TODAY.

Of course, it's reasonable for fans to want more photos of Gideon like this one. Gideon is a charming little baby, after all. That being said, however, it's definitely OK for Duggar to hold back. Duggar probably wants to savor each moment of Gideon's first year of life for herself, a theory I bet many parents out there can relate to. "He is growing so much and changing every day," Duggar said on the topic of Gideon's fast development, according to Us Weekly.

As for fans who can't wait every month for a new snap of Gideon, rest assured you'll see a lot of the baby on the next installment of Counting On. “Life has just been so busy for all of us,” Jessa Seewald gushed in the new season trailer, followed by a voiceover advertising lots of babies, according to People. "We’re counting on not just one baby, not just two babies, but three babies!” the promo teased, according to People.

Translation: fans will get to enjoy Gideon when Counting On returns on July 30. Buckle up for a load of cuteness, people.