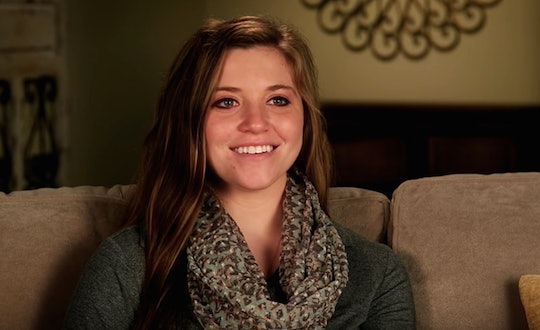 As Joy-Anna Duggar nears her Feb. 22 due date, many Counting On viewers are still throwing out theories about her pregnancy. If you've been following along with Duggar's pregnancy since her announcement in August, you probably are familiar with every fan speculation by now. Well, it must be a slow day in the Counting On universe because this one theory about Joy-Anna's pregnancy is making the rounds again thanks to her Valentine's Day Instagram post. Apparently, people just can't let this rumor go.

Throughout the past few weeks or so, Duggar has shared more pics of her bump than usual. It's a bold move, considering each time Duggar shares a bump pic fans flood her comments section with wild and unfounded theories about her pregnancy. The most popular one is that Duggar had premarital sex with her husband, Austin Forsyth, and she's lying to fans about her due date. Duggar, however, confirmed her official due date in an Instagram message on Tuesday. "Well, we didn’t end up buying anything today, but it’s always fun going to the auto auction! #9daystillduedate," Duggar captioned a snap of herself and Forsyth, according to Instagram.

Duggar's note, whether intentionally or not, silenced a lot of conspiracy theorists who assumed she had sex with Forsyth before their May wedding.

Now that the due date theory is out the window, one persistent rumor remains. It turns out that people are *still* convinced that Duggar is going to be a mom to twins.

The rumor mill reached a fever pitch on Wednesday after Duggar shared a Valentine's Day post to Instagram. "I love you so very much, honey! Thank you for making today special," Duggar captioned a photo of herself posing alongside Forsyth.

Of course, Duggar's fans couldn't help but comment on the size of her bump and why they think she'll give birth to twins.

"Such a big bump. Must be more than one," someone wrote. "I'm thinking twins ... wow," another fan said. And one particularly assured person commented: "She's popping out twins end of story."

Although the "end of story" comment did make me laugh (the confidence of people on the internet never ceases to amaze me), it's definitely unfair for fans to continue to speculate about Duggar's pregnancy. Duggar only has seven days to go, and I imagine it might be difficult for her to enjoy these last few moments in peace amid all the fan chatter.

Of course, there will always be the argument that Duggar doesn't have to post pictures of herself online, which is technically true. But this fact still doesn't justify all the rampant fan speculation and conspiracy theories.

Not to mention, every bump looks different. There's no correct way for a bump to look and you can't make a valid determination about someone's pregnancy just by looking at them. And most importantly, commenting on the size of someone's body, bump or not, is just offensive.

Unfortunately, this isn't the first time people have speculated that Duggar is carrying twins. Back in November, fans went into a frenzy after a photo of Duggar's bump surfaced online. One fan even theorized that Duggar is pregnant with triplets. Yep.

Although it's true that multiples do run in Duggar's family (Michelle Duggar gave birth to two sets of twins), the world won't know what's really going on until she gives birth or makes an announcement.

The good news is that fans probably won't have to wait long to find out either way because the Duggars are known for delivering important news ASAP. In fact, Jill Duggar announced the birth of her second son, Samuel Dillard, on the same day he was born. So, sit tight, Duggar fans. All of your questions about Duggar's pregnancy will be answered in due time.