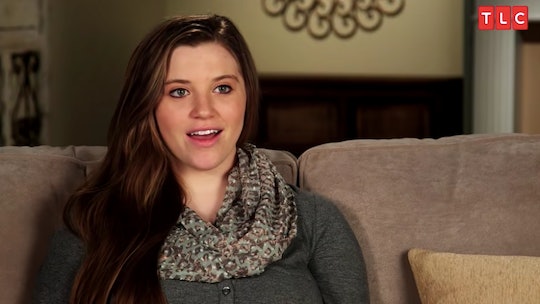 Baby Gideon Martin Forsyth has just turned one, and Counting On's Joy-Anna Duggar and husband Austin Forsyth have a lot to celebrate. In addition to getting ready to break out the cake and birthday candles, Gideon is going to be a big brother with Joy-Anna's recent baby news!

Still, we're talking about baby Gideon here, so let's give him a moment to bask in the family spotlight before things change with a new addition. Let's take a look back at Joy-Anna Duggar's sweetest mom moments over her first baby's first year.

As always, the Duggar family rallied around her as Joy-Anna prepared to give birth, finally having the baby after an emergency C-section, as People reported.

Despite being disappointed she couldn't have the baby at home, as the mag detailed, the new mom seemed ready to hit the ground running with Gideon, a strapping 10lbs. 3oz. and 22 inches long at birth, added People.

As her nonstop Instagram with the hubby shows, the next few months flew by as the couple adjusted to being parents. They eagerly sure to share snaps of Gideon resting on a baby blanket that adorably shows the baby's age in months according to where you put the marker (why didn't I ever have this blanket?).

Just like most other parents before them, I'm guessing the Forsyths soon discovered a weird thing that happens when baby is a couple months old and finally more portable: time seems to speed up.

I suspect this because they posed little Gideon on his blanket at the one-month mark, and then again at two months. After that, things just got hectic. It seemed they had forgotten about the whole project (welcome to the club, guys).

Not that there wasn't a lot to do as Gideon was getting through his infancy: The duo participated in a "Spring Marriage Retreat" at a local camp; celebrated Joy-Anna's first Mother's Day by getting all dressed up (for brunch? Church? I guess we'll never know), and had some bonding time with Grandpa Jim Bob.

As baby Gideon got a little bigger, it was easier to have him involved in the swirl of life, such as when Daddy took on a kitchen tiling job, which Gideon seemed happy to oversee, if not directly work on himself.

He also penciled in time with the cousins, visiting Jinger Duggar, hubby Jeremy Vuolo and their baby, Felicity, and Joseph and Kendra Duggar's young one, Garrett.

There were also trips to the zoo, floor time and a break to let mom and dad go camping.

And with Us Weekly reporting that Jessa Duggar Seewald, Kendra Caldwell Duggar and Anna Keller Duggar all having announced pregnancies, baby Gideon will soon be able to lord it over not just his own sibling, but a whole new batch of babies in the clan.

Yes, as Baby Gideon got ready to blow out the candles on his cake, it was clear: Life is good for this smiley kid, whose "happy" personality, as his mom reported according to In Touch magazine, jumps off the page, don't you think?

A very big congrats to Gideon on single digit life. As small as he is, he's about to become the big man on campus, at least in his own house!