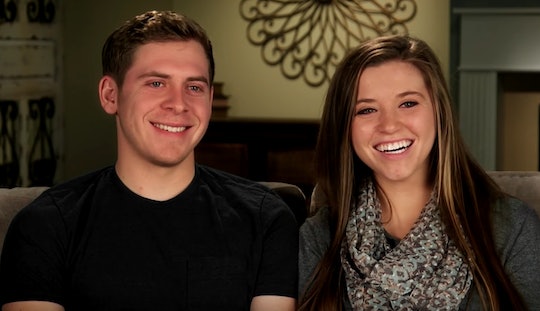 Joy-Anna Duggar and husband, Austin Forsyth, have one seriously adorable kid. Their 1-year-old son, Gideon Forsyth, is precious. And Joy-Anna Duggar's video of Gideon imitating a horse is physical proof of this.

The stars of TLC's Counting On make some cute kids. There are so many Duggar siblings, and their young children are growing every single day. Fans of the show have watched the second generation of Duggar babies be born on Counting On and have been able to watch them grow up on Instagram, where they seem to get older by the second. Duggar's most recent Instagram video of her son, Gideon, shows just that.

In the video, Gideon can be seen sitting on Forsyth's lap, waving at a field of horses, which is already so precious. But when Duggar asks her son "What does the horse say?" it gets even cuter. "May!," he replies, sticking his tongue out at the camera.

OK, so maybe he doesn't have his horse sounds down exactly, but, he does seem to be getting the hang of it. But even his missteps are super adorable. Even Duggar seems to think so. "Most of the time when he sees a horse he points and says 'Moo!'," she wrote in the caption of the Instagram post. "I love that he's starting to talk!!"

In the caption, Duggar wanted other parents to share the love and comment with the adorable things that their kids say — and they delivered.

"My 1.5 year old says 'ow ow hot' to anything hot or cold," one commenter wrote.

"My daughter used to say that horses say 'yee-haw'," another commenter added.

But most people are commenting about how precious Gideon is.

"Your kid is just so adorable," one commenter wrote.

"He is so dang cute!," another commenter exclaimed.

They're not wrong about that. Gideon is all sorts of cute — and it's so refreshing to see Duggar post a video of him. Her Instagram feed is full of the cutest photos of her little boy — from hanging out on a mound of dirt with his dad, to him hanging out with a puppy dog. Based on her Instagram feed, it's clear that her son loves going on adventures and spending all of his time outdoors, just like any other boy. It's obvious that he brings so much joy in her life, and that's awesome to see.

This is particularly special since Duggar also experienced her fair share of heartbreak this year. Earlier this year, Duggar announced that she was expecting her second child with her husband, according to E! News, but suffered a miscarriage just a few short months later, according to People. "Life is fragile and precious," she wrote in an Instagram post at the time.

After taking some time to heal, Duggar was back to posting about her family. In the months since then, Duggar has posted photos of her spending time with family and getting all of the love from her husband and son. "This brings my heart JOY," she wrote in the caption of the cutest photo of her husband and son.

It's the little things that matter — like watching her son learn what horses say and begin to start talking more. And Duggar's followers definitely understand that.