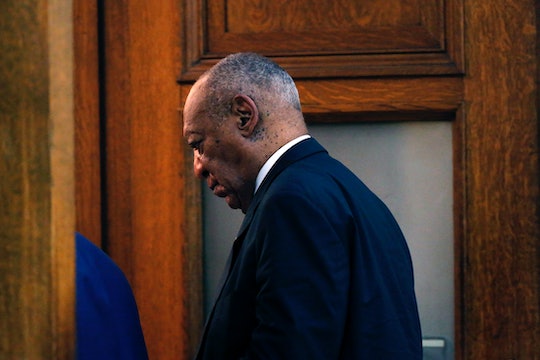 After days of deliberation, a Pennsylvania judge declared a mistrial in the Bill Cosby case. According to CNN, Judge Steven O'Neil dismissed the jury saying, "We've been at this now for 10 days. There has been nothing but a supreme effort on your part." Upon leaving the courthouse, Cosby told reporters that he wished everyone a "happy Father's Day" and thanked the jurors for their time. Kevin R. Steel, the district attorney from Montgomery County, Pennsylvania who brought the charges, said that he plans to retry the case, according to a statement. Romper's request for comment from both Cosby and Steel was not immediately returned.

The jury spent six days trying to come to an agreement on whether Cosby would be charged for three counts of felony aggravated indecent assault. The seven men and five women that comprised the jury came back with a total of twelve questions throughout the week, asking to clarify things that they heard in the courtroom.

The jurors questions throughout the week were mainly about some of the testimony they heard throughout the trial, although Cosby didn't take the stand. They asked to reevaluate evidence from Cosby's initial deposition that was unsealed in 2015, where he explained his relationship with Andrea Constand, the Temple University athletic director that was able to bring charges. Her testimony about her interactions with Cosby was also brought into question during the trial.

Although 60 women in total alleged that Cosby sexually assaulted them, Constand was the only defendant for this trial. She alleged that Cosby gave her sedatives before a sexual encounter and brought charges last year after signing a confidentiality agreement in 2006 that barred her from speaking about the alleged incident. Her reliability was brought into question throughout the trial.

On Friday, the jury asked the court to repeat Cosby's testimony about his relationship with both Constand and Quaaludes, the sedative in question. In a deposition in 2015, Cosby admitted that he had prescriptions for the sedative because of a bad back, but that he also gave them to women he met socially.

Cosby did not testify during the trial and no forensic evidence was made available to the jurors. Kelly Johnson, another woman who has accused Cosby of a sexual assault that occurred in 1996, testified during the trial in an attempt to establish a pattern of criminal behavior for the defendant.

The jury was made up of four white women, six white men, one black woman, and one black man. They were bussed in to Norristown, Pennsylvania from outside of Pittsburgh. They were staying in a hotel nearby during deliberations.