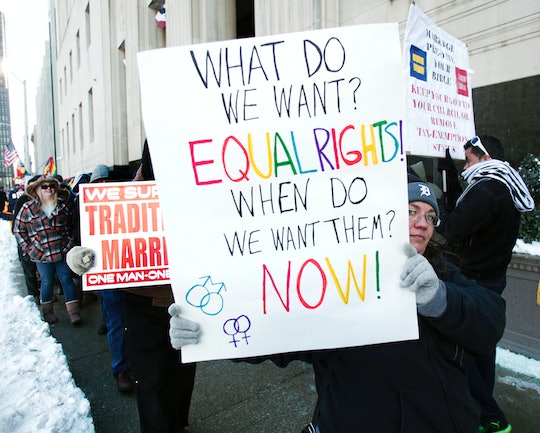 What's a judge to do when he doesn't believe in same-sex adoptions, but has no factual basis for ruling against them? Why, simply refuse to hear those cases at all, of course. A Kentucky family court judge has announced that he will recuse himself from adoption cases involving gay parents because of "personal religious objections" to homosexuality. And while Judge W. Mitchell Nance has framed his choice as a "matter of conscience," it could set a dangerous precedent, and hurt children in need of a loving home. In response to Romper's request for comment, Judge Nance's office stated that he would not be making further remarks on the matter beyond statements he'd already issued.

Federal and Kentucky state law both guarantee same-sex couples the right to adopt. Yet last Thursday, Judge Nance, who sits in Barren and Metcalfe counties, issued an order saying that he believes allowing "practicing homosexuals" to adopt is never in the best interest of children, and that gay parents hoping to adopt should take their cases elsewhere. He backed up his stance with an ethics rule dictating that judges should recuse themselves in matters of personal bias or prejudice. But many legal experts and critics are wondering if Nance is fit to stay on the bench at all, when his position is so blatantly discriminatory.

It's important to note that none of the facts back up Nance's belief. Children raised by same-sex couples do just as well as children raised by heterosexual couples. Numerous studies have proven the point. And most recently, a Columbia Law School's "What We Know" review of 79 studies on the subject found "overwhelming scholarly consensus, based on over three decades of peer-reviewed research, that having a gay or lesbian parent does not harm children."

Luckily, in this case, same-sex couples in Nance's district have another recourse. The 43rd Circuit Court where Nance sits has another division, and the judge in that division will continue to hear gay adoption cases, so couples shouldn't expect a lag.

But Nance's decree is still a concerning sign. What if all the judges in a particular court held similar beliefs, and recused themselves from such cases? What would happen then? How long would children in need of a loving home have to wait to be united with the same-sex couples who so badly want to care for them?

Perhaps Dan Canon, a Louisville lawyer who fought for same-sex couples in Kentucky to have the right to marry, said it best when he told USA Today,

It's obviously better that the judge recuse himself from these cases rather than potentially wreck the lives of children who desperately need loving, adoptive parents. But it's disturbing that this judge would cast aside everything we know about adoptions by same-sex couples to reach the patently false conclusion that such adoptions are not in the best interests of a child... The bottom line is if this judge can’t fulfill his duties because of his personal biases, he should resign.

Judge Nance may believe it's a "matter of conscience" to prevent same-sex adoptions. But for many others, their conscience tells them something different — that would-be parents and in-need children deserve a chance to find happiness.