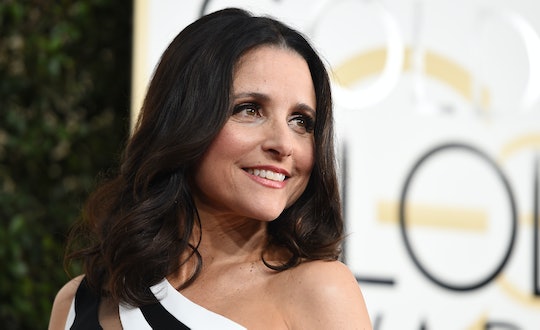 On Thursday, record-setting Emmy Award winner Julia Louis-Dreyfus revealed that she's been diagnosed with breast cancer. The 56-year-old star of HBO's Veep made the announcement via her official Twitter account, to the surprise and shock of her many fans. "1 in 8 women get breast cancer," Louis-Dreyfus wrote in a photo posted to her account. "Today, I'm the one." She prefaced her photo note posted to Twitter with simply, "Just when you thought..."

The news seems especially out of left field given her recent — and historic — wins at the Emmy Awards earlier this month. Louis-Dreyfus took home her sixth Emmy Award for her role as Selina Meyer on Veep, making her the first actor to win the most Emmys for playing the same character. She was quick to assure fans and followers on Twitter that she has "the most glorious group of supportive and caring family and friends," while also praising the "fantastic insurance" she has thanks to her union. Louis-Dreyfus is a member of the Screen Actors Guild. Earlier this year, she took home a SAG Award for her work on Veep.

Louis-Dreyfus has truly been on fire recently, which makes her breast cancer diagnosis all that more startling.

Since she posted her tweet, support for Louis-Dreyfus from both fans and fellow professionals has poured in on social media. Actress Christina Applegate was one of the first to reply to Louis-Dreyfus's tweet. "Mama, find me. Let's talk if you want," the 45-year-old actress replied. In 2008, Applegate had a double mastectomy after being diagnosed with breast cancer at just 36 years old. She has been in remission ever since.

Veep co-star Tony Hale also tweeted out his support for Louis-Dreyfus after her breast cancer diagnosis, writing, "We love this woman." Veep series creator and executive producer Armando Iannucci‏ offered a particularly moving tweet supporting his star. "It is possible to be dignified and fierce at the same time. I, and millions others, send Julia our love and support," Iannucci‏ tweeted.

What's particularly powerful is that, even though her news was deeply personal, Louis-Dreyfus used her breast cancer announcement as a platform to advocate for women's health and universal health care. Her statement continued, "The bad news is that not all women are so lucky, so let's fight all cancers and make universal health care a reality."

Even though the Affordable Care Act has great benefitted the breast cancer community, not every breast cancer patient has health insurance, or that their health insurance covers enough. It's one of the reasons fellow actress and breast cancer survivor Christina Applegate founded Right Action for Women, a non profit that provides financial assistance for women with high risk for breast cancer. Louis-Dreyfus's call for advocacy comes at a time when the GOP has tried — and thankfully, failed — to repeal the ACA not once, but three times this year while Sen. Bernie Sanders has introduced a single-payer health care bill dubbed "Medicare for all."

In the spirit of Louis-Dreyfus's selfless call to action, there are a number of ways that we all can get involved in the fight not just against breast cancer, but for comprehensive, affordable health care for all Americans. You can donate to Applegate's charity, Right Action for Women, which helps provide financial assistance to cover costs associated with MRIs and other breast cancer screenings, such as the BRCA genetic test.

While Louis-Dreyfus is a mother of two adult sons, raising awareness and supporting efforts for fertility preservation in the wake of a cancer diagnosis is particularly important. You can donate to Fertile Action, an organization that works to offset the costs of fertility preservation services such as egg freezing for cancer patients.

Finally, if you're feeling really inspired by the idea of having health care for all, pick up the phone and start calling for our man Bernie: Call your senator and ask them to co-sponsor S. 1804, the Medicare for All Act of 2017. If your senator has already co-sponsored the bill, you can still call them up to thank them for their support, and ask them what more you can do to help make Medicare for All a reality.

Louis-Dreyfus has not shared any other information about her breast cancer diagnosis beyond her tweet on Thursday — but I get the feeling that, given how politically active and outspoken she is, she will be just as an outspoken advocate for the cancer community as she has other causes important to her. I, like so many other fans of Louis-Dreyfus, wish her nothing but love, healing, and support as she faces such a scary diagnosis. Thankfully, they say laughter is the best medicine — so we know she's got more than enough in reserves to tackle breast cancer head on.