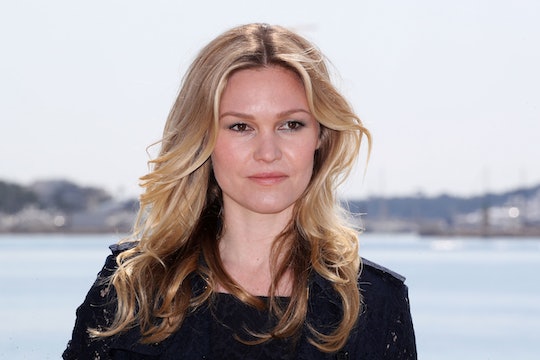 There's nothing like a little old shotgun wedding to bring out the best in people, am I right? The panic, the hastily arranged ceremony, the impending bump that needs to be concealed. Oh wait, that's the old kind of shotgun weddings, perhaps. So when Julie Stiles married Preston J. Cook in their "shotgun wedding," it was all very tongue-in-cheek, don't worry. Because it's 2017, and shotgun weddings aren't really a thing anymore. Other than as a little nudge-nudge, wink-wink kind of thing.

The Bourne Identity actress is expecting her first child with Cook, a camera assistant she reportedly met on the set of the 2015 film Blackway. Stiles' rep told E! News that the couple got married in an intimate ceremony over the Labor Day weekend with just two friends present. The wedding took place on a beach in Seattle, and Stiles took to Instagram on Tuesday to share a sweet photo of Cook's hand (rose gold band on his left hand, of course) resting on her pregnant belly. In the photo, Stiles is wearing a white lace dress.

"Who doesn't love a shotgun wedding?" she captioned the photo.

Now just in case anyone thinks the newlyweds were somehow forced to get married because of their baby, Stiles used a winky face emoji. So it's all good.

The couple got engaged last December, according to In Style magazine, when Cook popped the question as they spent their vacation on Isla Grande in Colombia. Stiles shared a picture of their hands intertwined (subtly showcasing her beautiful, simple engagement ring) on Instagram in January with the caption, "Best Christmas Ever."

She spoke to People about her engagement on the Colombian island at the time, saying:

That's where we got engaged. All around, it was a really wonderful trip. We stayed on an island that was really beautiful and there was a lot of great snorkeling. The city was really nice, too, but because I live in the city the natural scenery was really great.

She also told the magazine that she was taking her time when it comes to planning a wedding, "I'm not getting a ton of marital advice. We're really slow on the wedding planning so I haven't really been soliciting advice," she told People. "Somebody told me about radical empathy, but I'm still trying to figure out what that means. I'm trying to figure out what makes it radical."

Stiles officially announced that she was expecting her first child in June, according to People, and apparently that was enough to spur the old wedding planning into action.

Of course, wedding planning gets a whole lot simpler if you keep the guest list to two people and know a beautiful spot on a beach in Seattle to hold the ceremony. While the actual location of their wedding was not released, Stiles also shared a photo of Point No Point Lighthouse in nearby Hansville, Washington.

I have to say, if you're going to have a little shotgun wedding before your baby arrives, this beautiful lighthouse —during a beautiful sunset — looks like just about the best place to do it.

Wherever Stiles — who so many of us adore from her role in 10 Things I Hate About You (co-starring Heath Ledger) — might have gotten herself hitched, she seems to be having one hell of a year — a baby, a marriage, a new movie coming out.

And in case you missed the 90s, Stiles has been a pretty solid mainstay in Hollywood for more than 20 years. She started acting at age 11 and, other than a brief time off to attend Harvard, she's been working hard ever since and always managing to keep her cool, according to Rolling Stone.

So it's nice to see her enjoying her renegade little shotgun wedding. Way to shake things up a little.