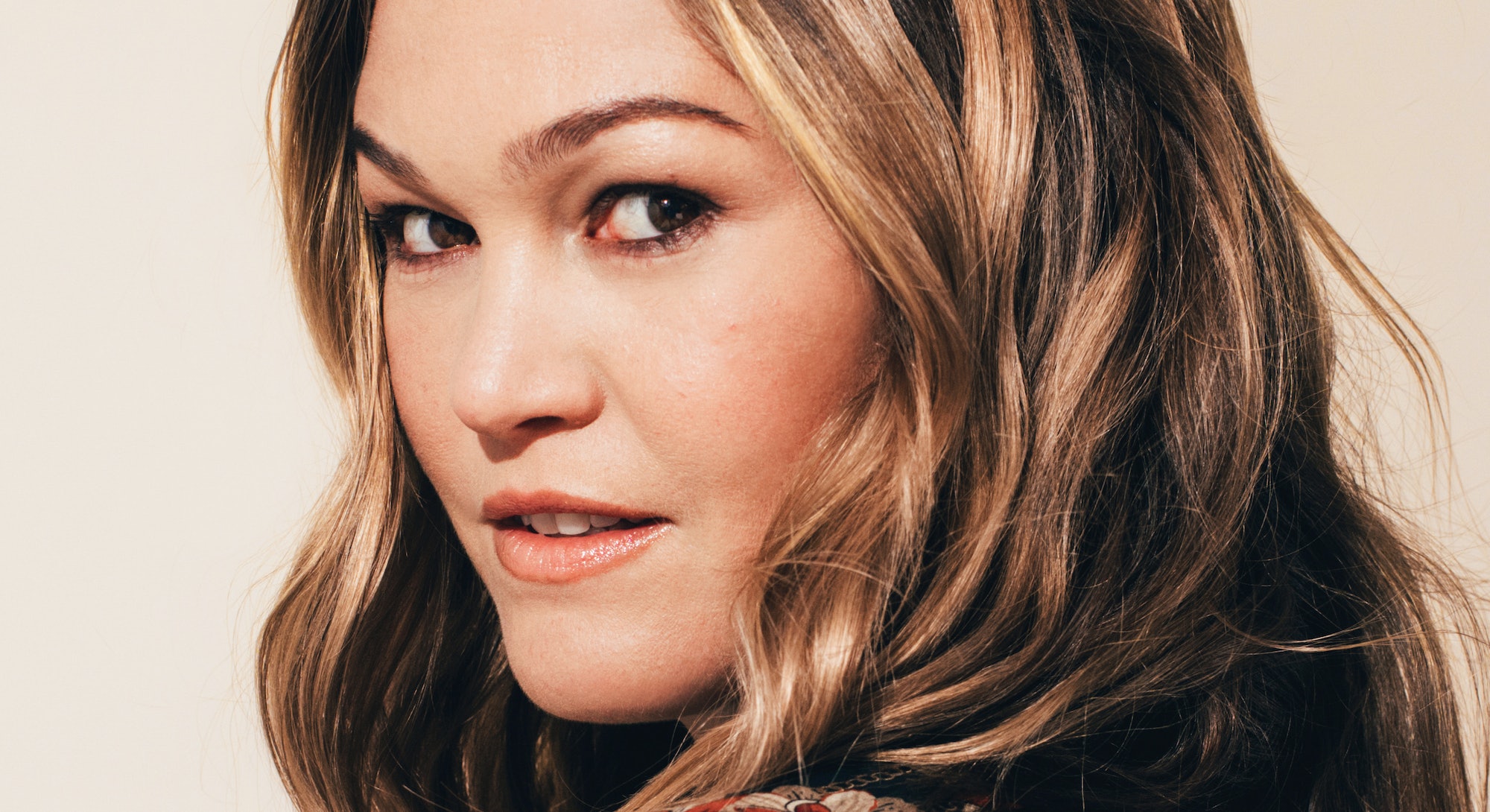 Julia Stiles On Working While Raising Her Toddler: “Being Away From Him Is Hard”

Julia Stiles has an idyllic life raising her 1-year-old on the Côte D’Azur six months out of the year: there is the sparkling sea, the array of saucy European accents, and the occasional cold-blooded murder. Typical family stuff.

“What appealed to me about [Georgina] is she's kind of reckless,” Stiles tells Romper of her character on Sundance Now's Riviera, who stabbed the chap played by Iwan Rheon (you probably know him as Game of Throne's Ramsey Bolton) in the head at the end of last season. (Cathartic!)

Stiles just hit the silver screen in her second season as Georgina Clios, an art dealer whose billionaire husband died in a freak yacht explosion in the pilot. As Georgina discovers more and more about her late husband’s family — each member of whom is predisposed to violence, murder, and enviable yachting attire — she becomes more and more likely to resort to the same tactics.

“I always ask myself, ‘Well, why doesn't she just leave?’” Stiles says of Georgina. “And obviously there wouldn't be a show if she did, but ... she's determined, and bold, and reckless, and surprising.”

It isn’t hard for Stiles to get into Georgina’s tragic world and dark mindset — “It's really more how do I get out of it,” she laughs. The show’s picturesque shooting locations on the French Riviera and costumes — which consist of big (but tasteful!) jewelry and patterned maxi dresses that the wind follows — help. Sometimes, at the end of the day on a long shoot at the Elthem estate in Antibes, which lies right on the coast, Stiles would run down to the water, get her hair wet, wash off her make-up, and go swimming. It is, in a way, an advanced level of self-care that I want to try, but also helped Stiles let go of Georgina before she went home to her toddler — something Georgina herself couldn't do.

When Georgina is introduced to us, she's seemingly innocent and naïve, and very quickly becomes... I don't want to say corrupted by her environment, but maybe loses her moral compass overboard. Georgina desperately wants to find out what happened to her husband. To the point that she cracks Ramsey Bolton in the head.

As I say, the stakes are higher with family.

Stiles welcomed son Strummer Newcomb Cook in October 2017 (“Hello, World!”). While she was pregnant, she documented her wedding to Preston Cook on Instagram, and, rather admirably, camped out at a music concert with her Snoogle pillow while eight months pregnant. She chats about Strummer’s glimpses of her work, and says that being a mother has “absolutely” changed her as an actor.

“My focus is less inward,” she says. “I don't go home and dwell on what I did at work that day, and I don't lie in bed thinking about the scene coming up tomorrow and stress about it. It's made me much more fluid as an actress.” She talks about finding Strummer's curiosity and excitement hopelessly contagious. “Toddlers are very much in the present moment. And his enthusiasm for the world, and the way that he sees things newly ... that is all passed on to me as well, and I think that can only help you as an actor.”

I don't think initially in my career I was that self-aware, or in that much control over it.

But then she has always been able to see past the limits of a character on a page. Back in 2012, she brought brilliant subtlety to the role of suburban mom Veronica, Tiffany’s (Jennifer Lawrence) sister in Silver Linings Playbook — recall her excitement at demoing the fireplace in the middle of the wall, and the iPod wall port (“Look look look… I can play music for the baby in any room,” she whispers. “Can you play ‘Ride The Lightning’ by Metallica?” replies Bradley Cooper’s character).

Veronica attempts to project a normal life onto her sister instead of accepting her for who she is — but it doesn’t work that way. She’s coming from a good place, but doesn’t understand mental illness and doesn’t acknowledge it, so their relationship is strained. Veronica’s belief in the trappings of supposed normality (“I just wanted to have a nice dinner”) is the same concept you see imploding in Riviera, and in the roles that set Stiles apart from her peers in the ‘90s.

There was a lot to love about Kat Stratford in 10 Things I Hate About You, the 1999 high-school-themed adaptation of Shakespeare’s The Taming of the Shrew that cast Stiles in the role of the “shrew,” against then-unknown Heath Ledger. I, like many other girls growing up in the ‘90s, aspired to be Kat. She was intellectual and intimidating, and didn’t cave to peer pressure. Her poem at the end of the film was, at least at the time, revolutionary for having a female character publicly stand up and ask for what she wants.

Like any actress in her 20s, Stiles was anxious about “what it would mean to get older,” to be in her mid-to-late-30s (the audacity!). But a cultural shift has “absolutely” influenced the entertainment industry, she says: “The roles that are available for me and my peers are much more interesting then they were when I was in my 20s, when I was first starting out.”

I note that Stiles — whose optimism is quite contagious — doesn’t say this in a way that suggests she regrets that these roles weren’t available to her two decades ago.

She has not shied away from shrewish characters in the years since 10 Things, though the notion of the unlikeable or difficult female has become more accepted and common. Stepping out of pouring rain into Romper’s New York City office in mid-June, Stiles says she wasn’t consciously thinking about breaking down stereotypes back then, particularly with her early roles like Kat: “I don't think initially in my career I was that self-aware, or in that much control over it.”

In the studio, Stiles seems expertly self-aware; she is playful in front of the camera, but the shots all come out with intention stamped all over them.

I don't care if I have to sweep the floors, or make coffee and sandwiches for everybody, I just want to be a part of the movie.

Kat, the unapologetic teen feminist, set a tone for Stiles’ career. But Stiles has not let her rom-com roots define her. Joan, from 2003’s Mona Lisa Smile, dreams of being a lawyer and gets accepted to Yale Law School, but ultimately chooses to be a wife and mother. She tells her teacher, Katherine — played by Julia Roberts — that her decision to choose a domestic life does not make her any less intelligent. Always, tension between ideas of what a woman can and should be. And in some senses, Stiles having it both ways.

Twenty years after 10 Things I Hate About You, Stiles is gearing up for the September release of Hustlers, a crime comedy movie based on “The Hustlers at Scores,” a 2015 article by Jessica Pressler published in New York Magazine and on The Cut. It’s a “modern Robin Hood story” about strippers who stole from rich men. The all-female cast includes Constance Wu, Cardi B, Keke Palmer, Lili Reinhart, Lizzo, and, of course, Jennifer Lopez. Stiles wanted to be a part of the movie so much that she told director Lorene Scafaria, "I don't care if I have to sweep the floors, or make coffee and sandwiches for everybody, I just want to be a part of the movie." (She... has a large role.)

Stiles is most excited about Lopez’s turn in the film. “When I was doing scenes with her, I couldn't keep my jaw in place. She has so many different hats that she wears, it's easy to forget that she's a serious actress.”

Leaving her son to go to work is sometimes difficult. Not so long ago, Stiles was “struggling a lot” at the thought of heading out for a day of shooting, so she pulled out her phone and showed her 1 and a half year old footage of her character Georgina getting in and out of a helicopter. “His new word, which has happened so quickly, is helicopter, and he points to the sky and says ‘Helicopter, helicopter, helicopter,’” she explains.

Riding in actual helicopters is one of the perks of the job, decades into the entertainment industry (you might remember her childhood turn on Ghostwriter). Stiles says that the role of Georgina on Riviera came to her, which she says doesn’t happen often, and was something she just couldn’t pass up.

“I was in an airport coming back from shooting the last Jason Borne movie, and I got a call from my agent saying, ‘You have to read this right away.’ And it struck me, the pilot episode struck me. And then it was a bit of a leap of faith, I had conversations with the producers about where the show was going to go, and what I was signing on to.”

Soon, she was being tossed about in the Mediterranean Sea and carrying a gun around in her YSL purse. It was a decision she didn't take lightly. "I have been more careful about making sure that when I choose a certain job that it's really going to be worth it, because being away from him is hard."

Her husband, Cook, works as a camera assistant on the show. They met on the set of 2015’s Blackway, and have found a way to make family life work alongside Stile's busy career. Strummer sometimes visits the set.

He might not understand his mom’s job, but he is old enough to appreciate a good chopper. On seeing the videos on her phone, Strummer said “Mommy!” so she thinks he understood.