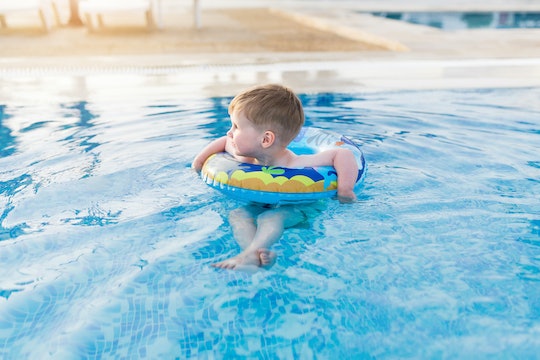 This summer already feels really, really hot to me, and it's only the beginning of July. I'm not going to complain of course, because I'm one of those lucky people who gets to live around the corner from three pretty sweet beaches. I used to have a friend with a pool, which is the holy grail for any mother who does not, herself, own a pool, but they moved. Still, I've been super keyed up to get out for a swim... that is, until I read a recent study by the Centers or Disease Control and Prevention, issuing a warning that July is the worst month for poop particles in pools and at local beaches. And now I'm trying to remember how many times my kids have opened their eyes and mouths under water...

The CDC recently put out a warning on its website that found "outbreaks from untreated recreational water can be caused by pathogens, toxins, or chemicals in fresh water (e.g., lakes, rivers) or marine water (e.g., ocean)." In other words, public beaches and recreational pools. After looking at public health records from 35 states (including Guam) between 2000 and 2014, the CDC found there were 140 reported recreational water-associated outbreaks from untreated water sources. And of these 140 reported outbreaks (which resulted in 4,900 illnesses and two deaths), a full 58 percent of them happened in July, according to TIME.

So what is causing all of these water-related illnesses, most of which we can apparently expect to start happening this month? You guessed it: poop particles. Or to be more scientific about it, gastrointestinal pathogens like the ever-popular norovirus, Shigella and E. coli, according to The Bump.

Essentially, people end up getting sick when they swim in untreated water because they ingest poop particles, either through run-off from sewage systems or waste water or, you guessed it, if someone poops while they're swimming. I really wish people wouldn't do that.

Beyond the human fecal matter that makes people sick when they're swimming in July, there's also parasites from bird toxins and algae blooms to watch out for, according to the report by the CDC. In fact, those two deaths were caused by a super rare type of fresh water ameba called Naegleria fowleri, according to CNN. It reportedly entered through the nose and destroyed the brain tissue of both people, the news outlet reported.

The leading cause of the illnesses were related to poop parasites. Now if you're starting to panic and get all glossy-eyed at the thought of having your kids out of school for the summer and no way to cool down in a pool, relax. There are ways around swimming in poop water. The CDC recommends swimming in chlorine-treated pools over untreated ones whenever possible. And if parents are planning to bring their kids to the beach, it's always a good idea to check for public beach advisories. These will update you on the most recent water quality conditions.

For parents, it might not be the worst idea to try to keep water from getting in your kid's nose and mouth if you can. Although let's face it, that's no easy feat. Otherwise, the CDC recommends avoiding untreated water if:

And of course, really try not to add to the problem. If one of your kids has diarrhea, guys, don't take them swimming, OK? And if you're going through toilet training, stay nice and close to that sweet, sweet public washroom. Because nobody wants to drink up a bunch of poop particles.