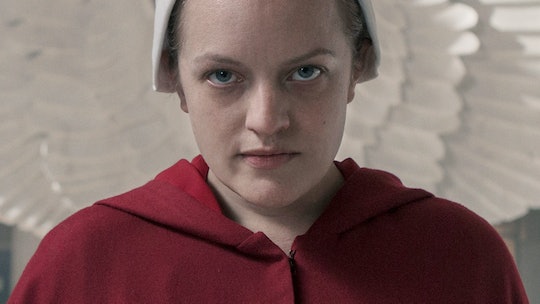 Season 3 of The Handmaid's Tale has opened my eyes to a world of new lessons — Serena Joy can't be trusted, I didn't actually need a backstory for Aunt Lydia, and the team really loves a good snapshot of Elisabeth Moss's anger-stricken face. Seriously, can viewers get through an episode of the Hulu series without a dramatic zoom in on June? It's clear that The Handmaid's Tale fans' are sick of seeing the same shot in every episode, and the June closeup memes and tweets prove it.

In The Handmaid's Tale subreddit following the eighth episode of the third season, user juancarlosojano detailed every episode that used June's closeup as the final shot. Season 1 had four out of ten episodes that ended on a dramatic look at June's face. Meanwhile, Season 2 had five out of 13. The fan also noticed that six out of the eight episodes that have aired thus far included the now-infamous extreme zoom in of June — a notable difference from the previous two seasons.

The fan then pointed out that this increase justified the "overuse of June closeups" criticism that has been flooding the internet. However, another fan hypothesized that The Handmaid's Tale team was acting intentionally.

"At this point I firmly believe that this is intentional beyond just an artistic choice to show her descent into madness," fakesaucisse wrote. "I would not be surprised if something significant happens to her face by the end of the season - rings in the mouth or she loses an eye or something? I dunno."

Although this fan theory is plausible, viewers will just have to wait and see what happens to June on The Handmaid's Tale. Nonetheless, the damage is done and fans have been growing increasingly impatient with the Hulu series.

After each episode of Season 3 that ended with a dramatic clip of June's face, fans took their frustrations to Twitter.

"The Handmaid’s Tale has turned into a complete circus! Over dramatic scenes ALWAYS ending with an extreme close up of June’s face and her craning her neck towards the camera," one fan wrote. "WE GET IT! She’s pissed and can make really intense faces. How many times are we gonna see this shot?!"

But not all fans are angry. Some are simply confused by the show's end goal. "Could someone explain me what is the plan of this season," a fan pondered. "Can’t get it. Slow, messy and full of close ups on June’s face."

Meanwhile, other are just hoping that the show progresses before the season is over. "Something needs to happen in #HandmaidsTale," a fan wrote. "Close up on June’s worried/vengeful looking eyes in to camera is getting a bit samey."

Regardless, most fans are simply bored with the show's newly-found predictability. "Another ending zooming in on June’s face... typical," a fan said alongside a photo of an expressionless Pooh-the-Pooh.

Even so, happiness can be found in the darkest of times, and some fans found the humor in the endless closeups of June.

No matter how haunting — and incredible — Moss's face is on The Handmaid's Tale, it's obvious that fans are ready to see some change in the final few episodes of Season 3. That said, it might be time to cross your fingers and hope that the season finale doesn't end on a major cliffhanger that features June's brooding face.