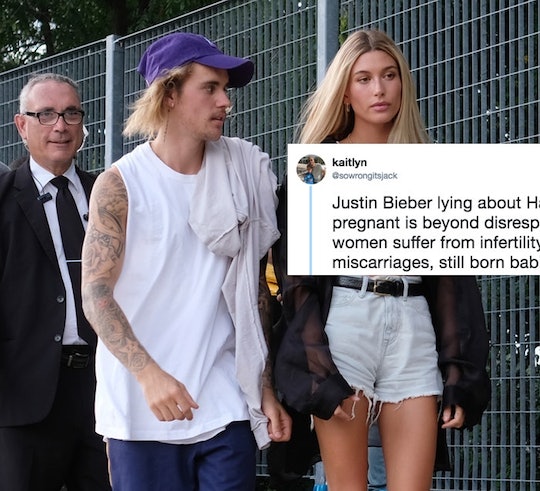 April 1 has come and gone, and along with it a slew of the year's most cringe-worthy dad jokes and mass-scale corporate pranks. Yes, April Fools' Day is a day to trick your unsuspecting friends, family, and Instagram followers into believing something ridiculous, but it's also a day people often take the laughs just a bit too far. Case in point: Justin Bieber's fake pregnancy announcement on April Fools' Day that's catching a lot of backlash on social media right now, and to be honest, their criticism is fair.

One of the most popular, and arguably insensitive, jokes that people like to play on one another is the faux pregnancy announcement. Whether this involves stock images of positive tests, sonograms, or anything else, it's really common, but to be honest, it's a bit strange. First of all, there's the fact that so many women struggle to get, and stay, pregnant in the first place. Joking about one's fertility is often left to those who are a bit naïve about how difficult it really is.

On top of that, telling your friends and family that you're expecting is often an exuberant, joyful time. To tease them with it and then say just kidding! isn't so much funny as it is a bit mean.

And on April Fools' Day 2019, Bieber pulled this exact prank. It all started when he uploaded a photo of a sonogram on Instagram with no caption, with the date and name conveniently cropped out.

Fans immediately started celebrating, which is a fair response considering that just last week reports surfaced that he and his wife Hailey Bieber feel they are "ready to have kids" but are "leaving the timing to God," according to ELLE.

Things got even more convincing when he posted a follow-up image of Hailey in what appears to be a doctor's office, with a physician and an attending both touching her stomach. It looks, on the surface, as though they could be giving her a sonogram.

"If u thought it was April Fools," he captioned that post, seemingly confirming the news for good. (In the defense of those who believed him initially, they really did go to some great lengths to create a convincing storyline.)

However, it all came crashing down with the third post of the day, which was another sonogram — but this time with a picture of a puppy covering the "baby."

It was his mother, Patti Mallette's comment, that cleared up speculation once and for all. "I’m always on guard and ready for you," she wrote. "I am SO looking forward to the day y’all bringing me babies that are GRAND! You’re going to make BEAUTIFUL children and be GREAT parents when the time comes! Maybe just don’t call me Grandma. Or Nana. Or Nanny. Or... OKAY I DON’T KNOW IF I’M READY!"

As sweet as it was, and funny (?) perhaps to some, it left others with a pretty bad taste in their mouth, and for good reason.

Romper's request for comment from Bieber's reps regarding the backlash was not immediately returned.

"Justin Bieber lying about Hailey being pregnant is beyond disrespectful. 1 in 4 women suffer from infertility, miscarriages, still born babies," one person tweeted. "How f*cking disrespectful, April fools or not, fake pregnancy announcements are f*cking disgusting. Are we still doing this in 2019?"

Another wrote, "Women with infertility already have a hard time with pregnancy announcements. Fake just makes it cruel. He deserves zero forgiveness."

Another chimed in, "I find it disgusting that Justin Bieber’s April fools joke was a fake pregnancy. Even worse, almost every verified IG account that commented on his post laughed it off. Are public figures really so concerned about what a celebrity thinks of them that they abandon basic decency?"

"April fool's day jokes are fine, except for when you announce a fake pregnancy," one wrote. "i have had friends who have lost their babies during pregnancy or were still sleeping at birth, it's quite sad and destressing [sic]."

One more commented, "I was so happy yesterday when I saw no fake pregnancy April fools 'jokes' until Justin Bieber did one for the whole world to see. Dude. Seriously. You are a mega star that millions look up to. Do better than that. Be better than that. It is not a joke and it is not funny."

Though many other people chimed in to agree, it was also pointed out that the Biebers are not the only ones who pull this prank on the first of April. In fact, it's a really popular joke.

However, it should go without saying that it can be unfunny at best, and downright heartbreaking at worst. This doesn't even include all of the fans who were understandably disappointed that the news was a fake out. Either way, everyone could stand to be a little more considerate — and perhaps a bit more creative — when it comes to pranks like this.