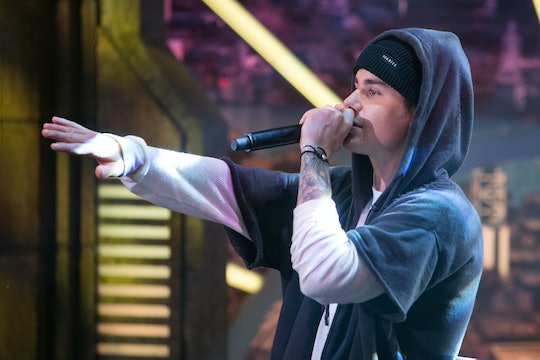 In case you missed it, just last night, Justin Bieber's new song "I'll Show You" dropped — and judging by the lyrics, The Biebs is sending a clear message to his fans and his critics about what life has really been like for him over the last couple of (tumultuous) years. Bieber's definitely had no shortage of headline-grabbing scandals — everything from walking out of interviews and concerts, to a DUI arrest in Miami, and, uh, peeing in a bucket — but he's also spoken time and time again about wanting to try harder to redeem himself, and judging by the lyrics and subject matter of the songs we've seen so far from his upcoming album, Purpose, it seems like he may be doing just that (in his music, anyway).

The reactions from his fans have been overwhelmingly supportive so far, with many of them commenting on how personal and vulnerable he's being with these new songs. And "I'll Show You" definitely seems to be the most honest of them all, with lyrics that, let's be honest, kinda totally make you want to root for him to pull through and totally turn his life around. Bieber himself hasn't commented much on the song other than to say that it's out, but that doesn't mean there isn't a ton of meaning we can interpret from the song (after all, he's made it pretty clear).

Everyone's Got An Opinion

My life is a movie

So let’s get to the good part

And past all the nonsense

It can be easy to hate on Justin Bieber sometimes, but you gotta admit, it's not easy to have all eyes on you 24/7. And even though he's made a ton of mistakes over the last few years that the press has had a field day with, there must also be a lot of stuff said about him that is inaccurate or unfair. Can't say I blame him for feeling stressed out about it.

Sometime’s it’s hard to do the right thing

When they don’t even know that I’m hurting

Bieber's spoken before about the pressure he feels to do the right thing, and how it can feel like he's unfairly judged for doing the same kinds of things that other people do all the time. In a recent interview with COMPLEX, Bieber opened up about feeling unfairly targeted by the cop who arrested him for drag racing ("The police, they just wanted press; they wanted attention. I never was speeding; I never was drag racing"). He also talked about being called a brat for peeing in a bucket, saying that "[if] Ozzy Osbourne pisses backstage. Immediately, “Oh, he’s a freaking rock star!” but if you're Justin Bieber, suddenly everyone's saying you're being disrespectful.

This life's not easy, I'm not made out of steel

You act like you know me, but you never will

But that's one thing that I know for sure

I got to learn things, learn them the hard way

To see what it feels like, no matter what they say

Bieber's getting a lot of love from fans online for talking about being human and real (*Maybe link to the other piece here about Twitter reactions??*), and deserving of support and second chances. And really, don't we all make mistakes that we regret sometimes? Growing up in the public eye doesn't leave a whole lot of room for screwing up, but like he says, sometimes you have to learn the hard way.

Love him or hate him, it definitely can't be easy to be Justin Bieber sometimes. And now, at least, he's being honest about it.