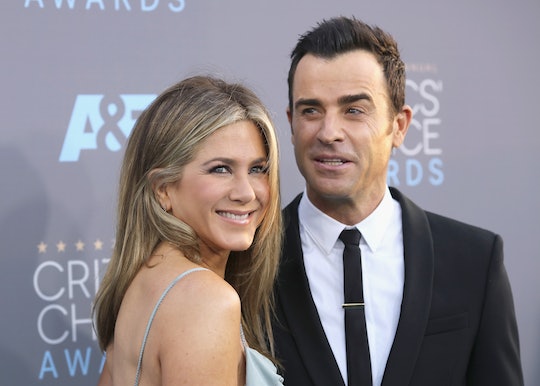 I wasn't the saddest person in the world when Jennifer Aniston and Justin Theroux announced via their agents that they were separating, but maybe I was in the top 10. I'll be honest with you and admit that I never cared all that much for Theroux but Aniston? Come on. Like everyone on the planet I just want the best for her, so when they broke up I was more concerned than socially acceptable. Months later, here we are again. For the first time in seven months, Justin Theroux opened up about his marriage to Jennifer Aniston and I have to admit... I feel marginally better about it. Because I think our girl is good.

Aniston and Theroux ended their three year marriage in February (they were together four years before that). Despite all of the rabid attention their separation received, the two were quick to smack down any awful rumors of something dark and nefarious causing their split. No, there was no cheating, according to Us Weekly. They didn't hate each other or abuse each other. They weren't jealous of each other and for the love of God, no, Theroux was not mad at Aniston for not having a damn baby like every media outlet suggested. Things just... ended.

And now they're both ready to talk about it, just a little.

Theroux recently spoke to The New York Times about his split with Aniston, and honestly he had nothing but kind words for their "gentle" breakup, according to Entertainment Tonight:

The good news is that was probably the most -- I’m choosing my words really carefully -- it was kind of the most gentle separation, in that there was no animosity.

He also went on to explain that the transient nature of their work as actors, when they were expected to spend large swathes of time living apart as he worked largely in New York and she stayed in Los Angeles. Because of this lifestyle, Theroux told the New York Times that the end of their relationship "doesn’t have that seismic shift of an ordinary couple, where everything is, like, you have to tear a baby in half."

Aniston had much the same impression of their breakup when she spoke to her friend (and wife of Jimmy Kimmel) Molly McNearny in an interview for the September issue of In Style. She explained that she's getting a little tired about all the misconceptions surrounding her relationship with Theroux but wanted to deal with one false idea in particular:

It’s pretty crazy. The misconceptions are 'Jen can’t keep a man,' ... Or that I’m sad and heartbroken. First, with all due respect, I’m not heartbroken.

Honestly? That's all I needed to hear. Not because I'm someone who is weirdly obsessed with Jennifer Aniston (just her hair), but because it's nice to know a person can come through a breakup without getting broken, to be honest.