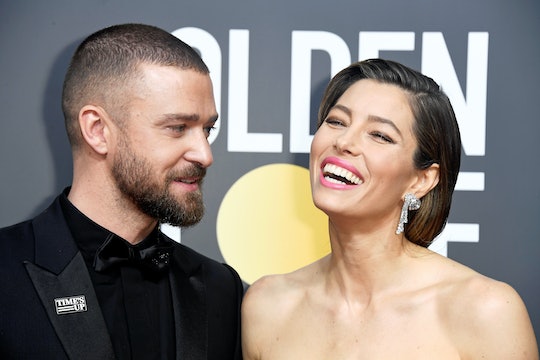 It's a discussion most couples probably experience at some point or another in a relationship: kids. Do you want them, how many do you want, when do you want to have them, etc. Because, if you don't get those key things somewhat sorted out right out of the gate, you could be in for some problems down the road. Like what do you do if only one of you wants a big family? Apparently Justin Timberlake wants a big family, and Jessica Biel? Yeah, her feelings seem slightly more complicated on the matter.

Back in January, the Grammy award-winning singer opened up on Beats Radio about his wish to give 3-year-old son Silas Randall more siblings, according to Entertainment Tonight. Timberlake said, “I want to have as many kids as we can, if I’m being honest," which is obviously very sweet and adorable in the abstract. But what about the reality of having a big family? After all, Timberlake admitted in that same interview with Beats Radio that parenting can be tough. He said, "When you have kids, all of a sudden you’re faced with your own childhood, good and bad. And, ‘Am I going to completely mess this kid up?’"

Plus, there's that other issue to consider. Like, does my partner, that person who presumably will be carrying and birthing said child, want to do this many more times?

And in Timberlake's case, the answer is basically, maybe, kinda, sorta, we'll see.

Jessica Biel, who has been married to Timberlake since 2012, shared her own thoughts about the possibility of welcoming a big brood of children with her husband. When discussing Timberlake's comments on Entertainment Tonight, the actress said:

Which doesn't exactly sound like a real, firm yes to me. It sounds more like, oh that's so cute!

According to Entertainment Tonight, Biel continued:

I think it would be amazing to have a bigger family. I don't know if that is in the cards for us, we will see. But I am feeling him. I don't know what that means exactly, but I like his dedication!

Again, she's not saying no, exactly. And she's praising him for his "dedication," which is very loving. But if I were Timberlake, I wouldn't make any assumptions vis-a-vis more kids at this point.

Whether or not Biel and Timberlake give little Silas a gaggle of brothers and sisters, I'm sure they'll figure out how to work their way through it. Because they just seem like one of those couples who are exceptionally in sync with each other. And they're nice enough to tell the rest of us how we, too, can have a little "sunshine in our pockets." Biel shared the secret of the couple's enduring happiness with People on Monday:

So I guess my tried-and-true method of giving my partner the silent treatment might not be as healthy as I first suspected.

Personally, I see them having a few more kids, but that's just me guessing. I would hate for Jessica Biel to feel pressured into birthing more babies on my account. But if she does have more babies... maybe we could get a sweet little glimpse of the gaffer every now and then? I would only recognize the back of Silas' head because they never show him on social media.

Which is totally OK too, of course. No pressure!