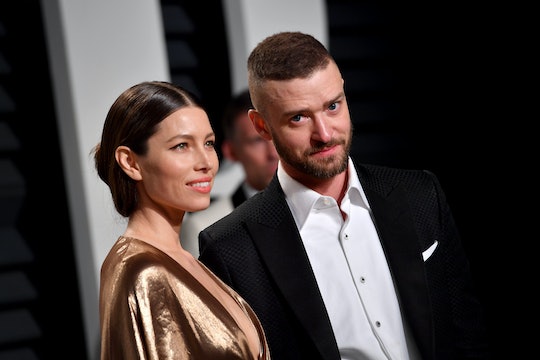 This article should be opened with a disclaimer; try to remember that your husband should not be judged by the nearly impossible standards set by one Mr. Justin Timberlake. He is not to be blamed, just because he can't quite manage to compete with the "Cry Me A River" singer's next level sweetness. Before you read Justin Timberlake's anniversary message to Jessica Biel, try to keep this in mind and remember all of the lovely things your fella does for you. He can't help it if he's not Justin Timberlake, right?

Timberlake and his wife, actress Jessica Biel, just celebrated five years of (apparently) wedded bliss. The two have been together since 2007, and were married in 2012. They are also parents to son Silas Randall, who was born in 2015. Timberlake took to Instagram to send out a tender message to his wife, complete with a serenade. He sang his own version of Leon Russell's 1970 hit "A Song For You," and captioned the video:

#TBT to a late night freestyle session on a break in the studio - YES I've been back in the studio cooking! But, today is even more special for me because five years ago, on this day, I became the luckiest man in the world when I exchanged vows with my best friend. This song was our first dance.

As if his serenade, looking especially edible wearing his cool dude hat and his scruffy beard, wasn't enough, he continued with this perfect little message:

To my beautiful @jessicabiel: You have taught me so much about what a true love means. I can't put into words what these last five years have meant to me, so... "Listen to the melody ‘cause my love is in there hiding...” #Happy5thAnniversaryWifey #ASongForYou

Timberlake closed out his stunning performance with a picture of him smooching Biel. Hold my coffee while I melt into the floor, please.

I wasn't the only one melting, of course. Fans shared their love of Timberlake's love for his lady on his Instagram page, with comments like:

manbchop99 wrote: ugh. He is such a good person. And yes, Anthony better get on it

meeshell78 wrote: Absolutely beautiful. Happy Anniversary @jessicabiel @justintimberlake- you both show what true love is and your son is so lucky to grow up in a house with that love

My tender heart is your, now until forever.

The gloriously happy couple were married at the Borgo Egnazia resort in Puglia, Italy in 2012. Since then, they have been consistently effusive in their love for each other, making everyone around them green with envy (if they ever break up, it's possible that might be the seventh sign of the apocalypse). Biel spoke to Marie Claire magazine in July about the secret to their bliss, saying:

We have similar values; we believe in loyalty, honest. We like to have fun. We like a lot of the same things. Also, in the business, we’re all very career-oriented, and you have to be a little selfish. I understand that about my peers — about being focused and driven — and if you can find that and someone who shares the same values as you, it’s like: Score!

So sure, Justin Timberlake is clearly head-over-heels in love with his wife. And yes, it's possible he set the anniversary barre a little high for the average dude.

But it's not his fault really, is it? He can't help being sweet, talented and adorable. He's just that guy.