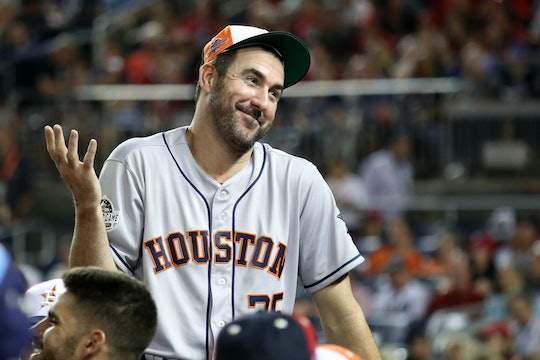 There are few things more pure than a little kid on a baseball field. It's the ultimate childhood dream to become a professional baseball player, and that magic for America's favorite pastime doesn't just disappear once you're an adult buttoning your jersey before heading out to the pitcher's mound. It's what Justin Verlander wants for his daughter — that same unbridled happiness and passion — and it's what he hopes she sees when she looks at him as she grows.

"My main goal for fatherhood is to make sure she’s happy. If all else fails, as long as she is happy, I think I’ve done my job," Verlander tells Romper in an email interview about his little girl, Genevieve, born in November 2018 to Verlander and his wife, supermodel Kate Upton.

"I’m lucky in that my dad has been a great role model and is now my go-to person for fatherhood guidance and support. I think about how my dad introduced a lot of great things to me and allowed me to be as good as I can be," Verlander says. "He allowed me to be the person I am and instilled this work ethic in me. These are some traits that I want to pass down to my daughter. What my dad has instilled in me from a young kid, to now a father, has allowed me to hopefully raise my daughter to be everything that I imagine she can be."

And for a guy who still can't wrap his brain around the fact that he's a major league baseball player, there's a lot to imagine for his little girl. I ask Verlander if the joy of playing baseball professionally has ever wavered or changed, and he assures me his passion is as magical as it ever was. "It’s absolutely still there. I always dreamed of being a major league player and it has never totally settled in that I managed to do that — it’s just kind of wild," he says.

Wild is an understatement. At just 36 years old, Verlander has been playing major league baseball for 15 years and was drafted in the first round in 2004. A lot of players start out hot like this, but Verlander's career has only continued to rise with awards like American League Rookie of the Year in 2006, the Cy Young Award in 2011 (a unanimous choice to give the award to Verlander), American League Player of the Week 20 times, a six-time All-Star, oh and won the World Series Championship with the Houston Astros in 2017.

I absolutely had fears going into this when it comes to balancing everything.

Basically? He's a big deal. But fatherhood is even bigger, and Verlander knows this. When I ask him how having a child has influenced his love and passion for baseball, he tells me he hasn't been impacted in that way yet, but trusts that when she's older and finds something she's passionate about, it'll remind him of just how incredible it is to love something so fiercely. And that love? It's not keeping him off the field — it's inspiring him to stay there and chase his own passion. "If anything, my daughter might motivate me to play longer. I want to play long enough that she can see me on a baseball field and remember me as a baseball player instead of having to watch old highlight videos," Verlander tells me.

It's a situation every parent understands — holding onto yourself, your passions, and who you are even after you become a parent. It's not always a career balance. Sometimes it looks like reminding yourself that you matter, too. That it's OK to let your kid color so you can have a hot cup of coffee in peace. That it's OK to let your mother-in-law take your children to the park so you can write. That it's OK to still chase your dreams while raising a baby. "I absolutely had fears going into this when it comes to balancing everything," Verlander says. "The amount of time you have is instantly cut in half or more because your priorities shift, and you want to be with your child as much as you can. Managing my schedule and commitments was what I was most concerned about."

A worry literally every parent relates to, right? But Verlander, like every parent, gets it done. "Being hyper-focused on my performance during spring training, staying connected to my 'other family' – my teammates - and working on things that have become an integral part of my daily life presents a unique set of challenges."

You have to take in those little milestones and really just live in the moment.

Verlander, who's a spokesperson for Flonase, says that on a recent video shoot he did with his dad for the 24-hour allergy relief nasal spray, his father gave him some great advice on staying balanced. "He said, 'Appreciate all the moments spent together, big and small, because the time goes by so fast.'"

It's advice Verlander has taken to heart, and he tells me that the reason everyone says "they grow up so fast," is because they absolutely do. "You have to take in those little milestones and really just live in the moment."

But all of this is why Verlander's adamant that one parent can't do it all. "I think parenting has to be an equal effort from both mom and dad, especially in our case," he says. "Kate and I both have incredible busy and demanding careers, and it’s on both of us to make the effort and time to be there for our family, first and foremost."

Being there for your family can look so different for everyone — but Verlander's onto something. By holding onto your own dreams and passions, you're teaching your children to go for it. You're reminding them that you are your own person. And you're taking care of yourself in the process.

"She’s still pretty little," Verlander says about his baby girl, whose birth he describes as "the best and most nerve-wrecking play" ever. "We haven’t really done a lot of bonding activities that she would remember yet," he adds. "But when she’s a little older, I’m excited to spend time learning about her passions and helping her reach [her] own goals .... I hope that’s what she looks back on when she thinks about me... happiness and support."