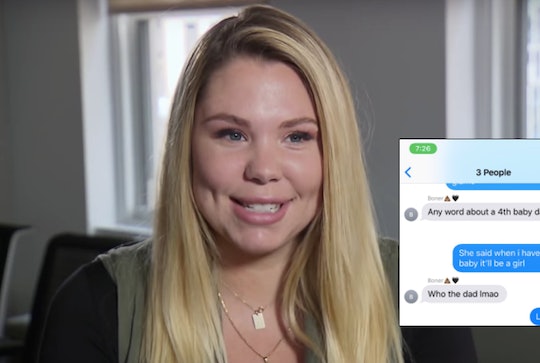 Fans of MTV reality star Kailyn Lowry have watched her bloom from the teenager who gave birth to her first son during the second season of 16 and Pregnant into a confident single mother of three on Teen Mom 2. At 25, Lowry delighted fans yet again when she gave birth to her third son, Lux, in August, and now her Instagram page is a sweet chronicle of her life as the mother of boys. So, when Kailyn Lowry joked about having a fourth child and alluded to the idea of having a girl on Twitter, it caught the attention of her fans and critics alike. And the online reactions to the comment — which, again, is very clearly a joke — showed that some are willing to take it way too far.

Lowry posted the screen shot of a group text with friends to Twitter on Sunday evening. In it, she had written "She said when i have another baby it'll be a girl," There's no context provided for who the "she" is, but Lowry's friend, who responded, "Who the dad lmao," likely knew exactly what she was talking about.

See, this is a joke, right? And Lowry decided to keep it going, replying back to the friend, identified as Twitter user @BoneEstradaaa, with an affirming "Lmaooo" following by, "Maybe I'll go to the bank b*tch damn." And to confirm that the whole conversation was going down in jest, Lowry captioned the exchange: "When your friends have jokes," when she shared it with her followers.

But, that didn't stop Twitter users and gossip sites alike from taking the story and running with it. Radar Online, for example, appears to have taken the whole exchange way out of context with this misleading headline: "Kailyn Lowry Reveals Plans For Baby #4 With 'Sperm Bank' Dad: 'It’ll Be A Girl!'"

Other such "news sources" took a similar tack, implying that Lowry had somehow announced a nonexistent (as far as the public knows) pregnancy:

Many commenters to the original post dove right into criticizing Lowry for even bringing up the possibility of having another kid. But, hey, at least most of them acknowledged that she was, in fact, just messing around!

One lauded the idea of going the anonymous route when picking a father for your kid:

Another came to Lowry's defense:

Maybe because it had become clear that some people were taking the joke a little too seriously, Lowry actually responded to one comment. Twitter user Lizzy MacDonald chimed in to tell Lowry "that would be cool though if u had a daughter." That's a nice comment; plenty of Teen Mom 2 viewers would probably be interested to see how the dynamic would change if 7-year-old Lincoln, 4-year-old Lincoln, and 4-month-old Lux had a new baby sister. But that's not actually the plan. "I really don’t think I’ll have any more children," Lowry wrote back.

Whelp, that settles that, as far as I'm concerned. But the joke wasn't over after Lowry posted her tweet. Just minutes later, Bone Estrada, the friend from the group chat, retweeted Lowry's tweet and added a message of her own: "She needs to hit all the Hispanic cultures...who is next? Spain? Columbia? Venezuela?"

This, likely, is a reference to the fathers of Lowry's three sons. She shares Isaac with ex-boyfriend Jo Rivera, Lincoln with ex-husband Javi Marroquin, and Lux with friend Chris Lopez.

For the time being, though, it actually does seem that Lowry would have to be a bit more purposeful about it is she does decide to have another baby. She recently shared that she is dating a woman as a guest on the podcast Coffee & Convos. But, whatever happens next for Lowry, there's no doubt that there's plenty of public interest in her family planning choices.