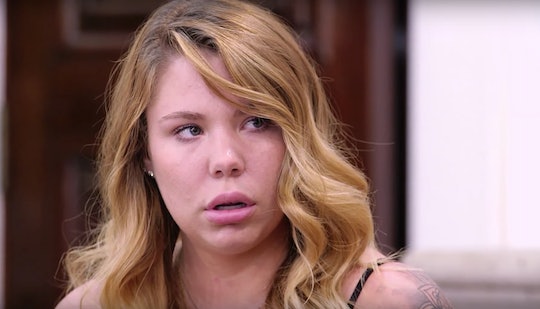 There's no doubt that a person's childhood experiences, perhaps especially where their parents are involved — or not — will drastically affect what kind of parent he or she will someday become. And that certainly applies to MTV reality Teen Mom 2 star Kailyn Lowry, who opened up about how her difficult childhood "influenced" her becoming a teen mom recently. She also shared how her own mom's reported failings inspire her to do better for her own kids. Lowry is the mother of three young boys, and she started off her life as a mom at the age of just 17 under the watchful eye of MTV's reality cameras.

In a brief sneak peek for Friday's upcoming episode of Marriage Boot Camp: Reality Stars, the now 25-year-old Lowry shares some new details about what it was like growing up with a mother she says was an alcoholic. Specifically, she referenced a time that she felt particularly abandoned by her mother:

I was like, maybe 6 [years old] and the cops came for my mom. They just took her away. I didn't understand why. I didn't know why she was being taken from me. ... Now I know — addiction can do horrible things to people. ... I definitely think her not being there influenced me to have a child young.

Of course, it's well-established that such early turmoil and abandonment can have lifelong effects on a child. But Lowry has made it her mission to not repeat the mistakes that hurt her as a child.

"I just want to be a better parent," she says in the clip. "I want to be everything that she was never to me."

And it certainly seems as though she is succeeding. She is raising her three young sons as a single parent as well as co-parenting with their respective fathers. Of course, social media and reality television don't always provide the most complete or accurate picture of what a person's life is really like, but in this case, I think that public information about Lowry provides a pretty good idea of what a loving and present parent she is. First off, take a look at just how adorable Isaac, Lincoln, and new baby Lux are.

And Lowry, who wrote in her 2014 book Pride Over Pity that her father was not involved in her life as she grew up, seems to be making every effort to ensure that her boys get the love of both of their parents. "Every child deserves their dad," she told RadarOnline of Lux's father, Chris Lopez, in an interview shortly after the baby was born in August. "I’m hopeful. I'm positive he’ll be around." Separately, she and ex-husband Javi Marroquin — her middle son Lincoln's dad — recently got together to play soccer with the two older boys.

Lowry shared in Pride Over Pity that her mom's alcohol and addiction issues led her to "disappear for days without warning," RadarOnline reported — a situation that was obviously hard on a younger her. Lowry, in turn, started engaging in risky behavior, such as smoking pot and getting into fights at school, even getting suspended for 10 days on at least one occasion, according to RadarOnline. If this all had to do with her mother's behavior (which, Lowry claimed, also included showing up drunk to her school), it makes sense that it could have led Lowry to get pregnant at a young age.

The good news, though, is that Lowry is now in a much better place, having become a bestselling author, graduated from Delaware State University with a bachelor's degree in mass communications, and shown the world that she is dedicated to her sons.