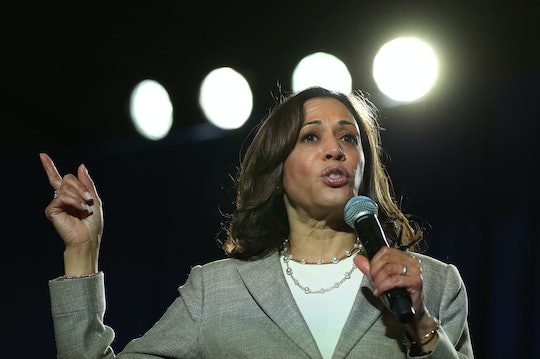 Medicare For All took center stage during the second Democratic debate on Wednesday night. The issue was debated for nearly an hour, with California Sen. Kamala Harris debating her own health care plan at length. But what exactly is included in the presidential candidate's proposed plan? Earlier this week, Harris released the details behind her health care policy in a post published on Medium, explaining how it "create a new viable public system that guarantees universal coverage at a lower cost."

Harris' plan says it will provide comprehensive and universal health insurance by addressing "what keeps people up at night," such as high deductibles, high cost medicine, and a potential lack of coverage if they lose their jobs. In her post on Medium, Harris outlined her plans for providing an expanded version of Medicare For All. "Medicare for All will cover all medically necessary services, including emergency room visits, doctor visits, dental, hearing aids, mental health, and substance use disorder treatment, and comprehensive reproductive healthcare services," she wrote on Medium.

People would have to "immediately" buy into a Medicare plan first, which she says will immediately lower the cost, with the goal of lowering the overall cost for the nation, much like Sen. Bernie Sanders' Medicare for All plan, according to Vox.

Although many of Harris' fellow candidates support Medicare for All as well, her plan is different. Harris' health care plan would still include a major role for private insurers, according to Vox, who will be able to offer Medicare plans that adhere to strict requirements towards costs and benefits. This would allow people to decide whether or not they want a public or a private plan. It would also allow people to have the option of purchasing "supplemental insurance" to cover things like cosmetic surgery, which Medicare for All would not cover, according to NBC News.

Harris' plan, however, would take 10 years to completely phase in, according to CNN. This slow transition is supposed to give doctors time to get into the system, and essentially give the nation time to catch up on these major changes. Harris also claims that this would save the nation money. Newborns and the uninsured would be immediately enrolled into her plan.

Critics of this plan think that 10 years might be too long to wait, however; it took President Obama two years to pass the Affordable Care Act (ACA) in 2010, though it was heavily delayed by the GOP, which repeatedly tried to repeal and amend the ACA. "Hey @KamalaHarris I can’t wait 10 years for #healthcare," one critic wrote on Twitter.

Harris' plan, however, does guarantee universal coverage, and aims to provide Americans with affordable health care services. Her proposed plan would provide new benefits that are not currently covered under Medicare, according to CNBC, like dental and mental health.

While Harris' plan has its critics, it also has its supporters. As this presidential election continues on into the following months, voters will undoubtedly need to hear more about important, key policy stances like this.