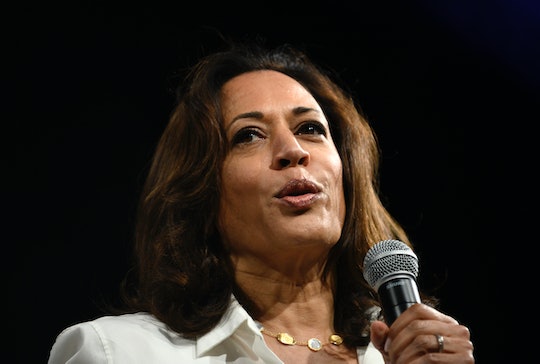 As the 2020 presidential election inches closer, Democratic candidates are continuing to roll out policy proposals on everything from gun reform to education. Another area of focus? Support for working parents, as millions of Americans — both dads and moms — don't have the resources they need to take time off after having a baby. And this is one reason why California Sen. Kamala Harris' paid family leave plan is garnering lots of attention, as it promises six months of paid time off.

On Oct. 7, Harris' campaign unveiled the plan as a part of her "Children's Agenda," which aims to give every child in America "a fair shot at success in life," according to her campaign website. And to give children a platform to succeed, you need to support their parents, too. So Harris is proposing six months of government-paid family leave to families earning less than $75,000, according to Vox. What's more? The plan also covers medical leave, so if you're child is involved in an accident or has a chronic illness, to name some examples, you're covered financially for six months. Furthermore, it applies to "non-medical needs" related to domestic violence or sexual assault, according to CNN.

One of the best parts about the plan? It's not restricted to immediate family members, so employees can take time off to support "domestic partners, parents-in-law and 'chosen family,'" according to Politico.

To ensure the program runs smoothly, the Harris administration "would create an Office of Paid Family and Medical Leave to oversee the program and workers on leave would have protection from retaliation," according to CNN. Considering pregnancy discrimination is alive and well in the workplace, this is an important piece of the puzzle.

Harris said about the plan, according to The Hill: "Guaranteeing six months of paid leave will bring us closer to economic justice for workers and ensures newborn children or children who are sick can get the care they need from a parent without thrusting the family into upheaval."

She continued: "To give all children in America the opportunities they deserve, this comprehensive children's agenda will protect their rights, ensure they have access to health care and high-quality education, and dramatically reduce child poverty."

It's also interesting to note that comparatively to other paid family leave plans from other 2020 candidates, Harris' proposal offers the longest period of funded time off.

As for the proposal's finer details, it's unclear how much paid family leave would be covered for families earning over $75,000. And it's not exactly obvious how Harris expects to finance the plan, but her campaign did shed some light on this area, noting it will be paid for through a "combination of employer and employee payroll contributions and government expenditures paid for by tax increases on the top one percent and big corporations," according to KTLA.

Of course, I'm sure more details about Harris' plan will come to light in the coming months. And although some might view her proposal as too ambitious, it's hard to deny she has the right values in mind because all parents deserve support in the workplace.