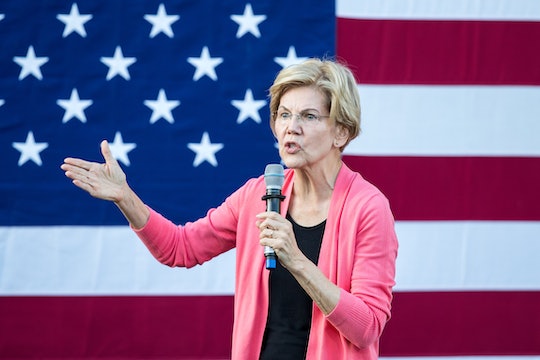 Proof For The Non-Believers: Pregnancy Discrimination Happens All. The. Damn. Time.

Democratic presidential candidate Elizabeth Warren has been ruffling feathers lately. Why? Because she shared a story she's been telling for years about losing her first teaching job while she was pregnant. Suddenly her critics are up in arms, accusing her of fabricating the story. It's important to point that while it wasn't the case at the time of Warren's experience, pregnancy discrimination is indeed illegal, yet stories like hers absolutely exist today. In fact, there's research that proves just that. And perhaps, more importantly, there are accounts from actual real women who have had it happen to them.

On Tuesday, Oct. 8, Warren once again opened up about losing her first job as a teacher in 1971. "When I was 22 and finishing my first year of teaching, I had an experience millions of women will recognize," the presidential hopeful wrote on Twitter. "By June I was visibly pregnant — and the principal told me the job I'd already been promised for the next year would go to someone else... This was 1971, years before Congress outlawed pregnancy discrimination — but we know it still happens in subtle and not-so-subtle ways. We can fight back by telling our stories."

The response to her story has been mixed; while some of her critics came after her and accused her of lying, plenty of others knew all about the experience she described. Because they had gone through something similar themselves.

Whether you are a supporter of Sen. Warren or not, the reality is that pregnancy discrimination in the workplace happens all the time. While pregnancy discrimination was made illegal by a 1978 amendment to the Civil Rights Act of 1964, there are still plenty of ways employers can find to either avoid hiring a pregnant woman or make her job obsolete.

In fact, pregnancy discrimination actually starts during the hiring process for many women, according to a survey of employers conducted by the Equality Human Rights Commission. The survey found that a full 36% of employers agreed that it was appropriate to ask a woman if she was planning on getting pregnant in the future during the recruitment process, while 46% were fine with asking them if they had small children as a way of vetting employees.

Some might look at Warren's story and say "oh that was ages ago, this doesn't still happen." But a 2018 investigation by The New York Times highlighted the fact that pregnancy discrimination in the workplace is alive and well, and a true detriment to society. The New York Times delved deeply into the stories of five women who saw their careers derailed, destroyed, and sent them into a downward spiral of economic ruin. Five stories that are all different but all too familiar. And not necessarily one that happens to fathers.

But once women actually managed to get hired after being grilled over the personal family plans, becoming pregnant at work isn't exactly a cake walk. Between 2010 and 2015, CNN reported that almost 31,000 pregnancy discrimination charges were filed with the U.S. Equal Employment Opportunity Commission. And by 2017, more than $15 million worth of settlements were paid out for pregnancy discrimination charges.

It's not always about losing your job either; sometimes the discrimination comes down to accommodations at work. According to a 2014 report from National Partnership for Women and Families, pregnant women and new mothers reported that they faced hurdles when requesting things like time away for prenatal visits, bathroom breaks, and for work that was not as physically demanding. In fact, the research found that "the majority of women surveyed reported feeling like such discrimination and differential treatment stemmed from their pregnancy, leave or status as a new mother."

Beyond reports, surveys, and statistics, women have taken to Twitter to share their own experiences in response to Warren sharing her story. As one woman commented on Warren's tweet, "A few years ago I interviewed for a job and was asked if I thought having small children would impact my ability to get to work on time because in their experience moms with young kids had trouble being punctual. My husband has never been asked that question in a job interview."

Another woman shared that she was fired "the day after" she notified her employers of her pregnancy; she was told she "wasn't likeable enough." Her tweet continued, "I got a lawyer and a settlement. Interviewing in the third trimester is an experience I wouldn’t recommend (albeit necessary for many)."

One more shared on Twitter that, in 2012 when she was seven months pregnant, "my boss hauled me into his office and chewed me out for 'putting [him] in a real bind by going on maternity leave.' That’s a quote. He then demanded I return after six weeks and immediately start working 60-hour weeks."

Yet another woman shared on Twitter, "I once applied for a job while VERY pregnant and was told that I might not be a good fit because I had 'other priorities' and a gesture was made to my stomach and that was in 2013 so yeah, I believe Warren on this one."

Pregnancy discrimination in the workplace is an ongoing issue. Employers can be insidious and careful about the way they do it, but make no mistake — it's still happening. Whether you like Elizabeth Warren or not.