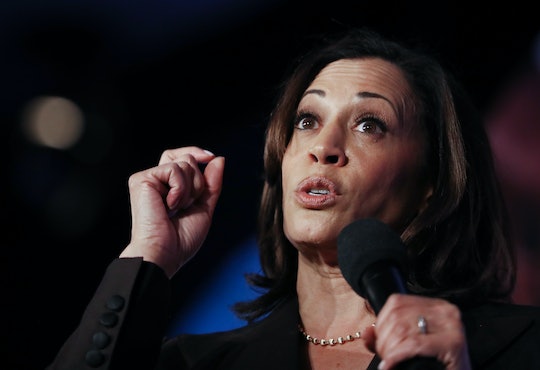 In an effort to make children's time out of the house more similar to their parents' work schedules, California Sen. Kamala Harris introduced a plan to lengthen school hours. On Wednesday, the presidential hopeful proposed a bill, dubbed the Family Friendly Schools Act, that would keep schools open for an additional three hours — starting at 8 a.m. and ending at 6 p.m. Many working moms and people who grew up as latchkey kids have taken to social media to express their support for the plan, saying it would greatly help their families.

"My mother raised my sister and me while working demanding, long hours," Harris said in a press release announcing the proposed legislation that aims to "modernize" school schedules. "So, I know firsthand that, for many working parents, juggling between school schedules and work schedules is a common cause of stress and financial hardship."

While not every school is the same, most students in the United States start class around 8 a.m. and end around 3 p.m., leaving a two- to three-hour time difference before many 9-5 working parents are home with their children. Harris says her "bill provides an innovative solution that will help reduce the burden of child care on working families" and will help alleviate the financial stress for many parents face, especially low-wage workers.

Harris' plan does not require that children study for 10 hours during the day. Rather, CNBC reported that the extra hours can go towards extracurricular activities, such as "dance and theater programs" as well as "other enrichment activities."

The press release announcing the proposed legislation stated that community partners will collaborate with schools to "develop high-quality, culturally relevant, linguistically accessible, developmentally appropriate academic, athletic, or enrichment opportunities for students from at least 8 a.m. to 6 p.m. Monday through Friday during the school year, with no closures except for Federal holidays, weekends, and emergencies."

To do this, the "first-of-its-kind pilot program" would give grant money to 500 schools that serve low-income families, according to the text of the bill. The schools will be awarded five-year grants, up to $5 million in total.

Many have taken to social media to say that having after-school programs in place would greatly help their families. As one mother wrote on Twitter, "I currently have a 2 hr gap between the time my 9 yo daughter gets out of school and the time I get off of work. This would be so [helpful] to me as a single mom."

Another supporter of the plan wrote on Twitter that "the school day was originally set assuming that there would be a stay-at-home Mom. Since that is no longer true, time for a change."

One said this plan addresses "something [she] struggled with daily" when she was a single mom, while another single parent said that she's "had to stress & juggle pick ups & [after school] care" and this plan would have been a "godsend."

"My mom was a single mother with 3 kids still at home," another shared on Twitter. "She worked full time and had to juggle our school and sports and her job. We were latchkey kids. This plan would have helped our family."

"As a kid who was STRESSED TF out waiting for his mom or grandma to pick him up from school and OFTEN had teachers waiting with me outside of LOCKED gates, keeping schools 'open' until 6pm is an immeasurably compassionate policy aimed DIRECTLY at working class families," one more person shared.

Some, however, have criticized Harris' plan, citing concerns that kids are already tired from their normal school day. One persona wrote on Twitter, "most students are already tired of even being in school after 2 hours... try to improve your education system and environments instead of forcing us to stay in there."

One said that while it addresses a problem working parents face, focus should be put on having work schedules meet school schedules. "Make workdays shorter to line up with the school day," one person wrote.

Harris' plan would not force teachers and school staff to work extra hours to keep the schools open later, unless they decided to do so. And if so, they'd be "compensated fairly for the additional hours," the proposal states, though it's unclear how to programs would be staffed if teachers do not sign up.

The proposal would also allocate money to go towards "summer programs and activities when school is not in session," according to CNBC. For example, in the event that school is closed for parent-teacher conferences, students would be offered "full-day enrichment activities" for free under the plan.