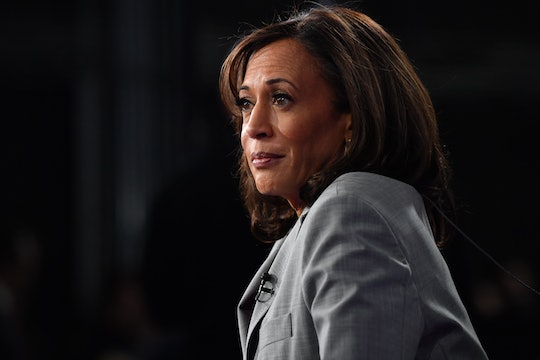 It took five rounds to get there, but the topic of child care and family leave were finally discussed by presidential hopefuls at Wednesday night's Democratic debate. While the leading candidates are on the same page that the United States really needs to catch up with other developed countries on the issue, it was Sen. Kamala Harris' comments on giving six months of paid leave that truly made waves.

Harris first introduced her plan to offer six months of paid family leave, dubbed "Kamala's Children's Agenda," back in October. And on Wednesday night, she doubled down on her plan, outlining the impossible situation too many women are in today.

"Many women are having to make a very difficult choice about whether they’re going to leave a profession for which they have a passion to care for their family, or whether they’re going to give up a paycheck, which is part of what that family relies on," Harris said. "So six months paid family leave is meant to adjust to the reality of women’s lives today."

Six months of paid leave could make a huge difference in the lives of not only women, but of so many families in the United States. Why? A report published by The New America Foundation states that for optimal health of mother and baby, paid maternity leave should be a minimum of six months. That's, in part, because women's bodies need time to recover after childbirth. Plus, new moms often face additional challenges during the postpartum period, such as fatigue, depression, pain, and lactation issues, which all require more recovery time. Add this to the fact that infant mortality rates decrease as a result of increased paid maternity leave policies, as Forbes reported, and it really puts the importance of maternity leave into perspective.

Heck, it might even improve the falling birth rate in our nation because people could actually afford to have babies.

Critics of Harris' plan may find six months excessive, but it's important to note that the United States is one of the only developed countries not to mandate any sort of paid, family leave. Meanwhile, most developed nations pay new moms at least half of her salary during time off, according to a report from the Organization of Economic Cooperation and Development (OECD.) In fact, according to the report, which included 42 countries, leave ranged from six weeks of fully-paid leave in Portugal to 58.6 weeks in Bulgaria at 78.4% of their pay. (Although most of the countries in the study hovered around 16 or 18 weeks of paid leave.)

Yes, the Family Medical Leave Act (FMLA) does guarantee you'll have a job to come back to, if you meet certain criteria as an employee and if your place of employment has at least 50 employees. But as far as lost wages are concerned, you're on your own, unless your job voluntarily offers full or partially-paid leave. That goes for time off after the birth or adoption of a child, or for caring for a sick or dying loved one. Because let's get real: As Harris pointed out on Wednesday, the "burden" of caring for loved ones often falls on women.

The plan Harris unveiled in October would make it so people who make less than $75,000 per year would qualify for full wage replacement during their six months of leave, according to her website. (Households that earn higher wages would have progressively smaller benefits.) Additionally, this paid leave would be available to all types of workers, including those who are self-employed or independent contractors, and it could be broken up and split into smaller portions.

In conjunction with Harris' paid family leave proposal, she would push for the passage of the Child Care for Working Families Act, which would put a cap on the percentage of income low- and middle- earning families spend on childcare.

Of Harris' plan for six months of paid family leave, as a working parent myself, all I have to say is this: It's about damn time. While I'm finished having kids of my own at this point, it's my hope that universal paid family leave will be a reality by the time my children start families of their own. Because new parents shouldn't have to choose between paying the bills, their passions, and caring for their parents, partner, or children.