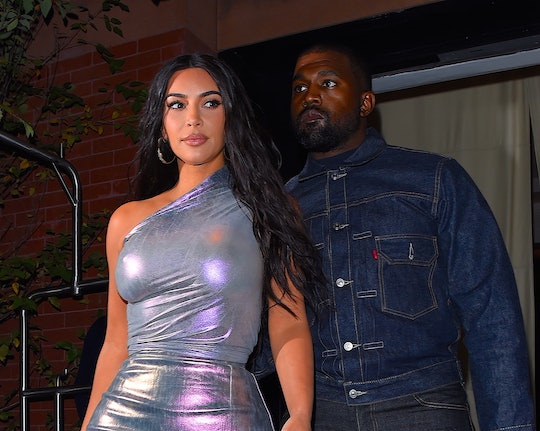 Some people opt for gift certificates or sweaters for birthday presents, but when you are one of the most famous rappers on the planet like Kanye West, you kick it up a notch. And that's exactly what he did for his wife's 40th birthday when he gave Kim Kardashian a hologram of her late dad, Robert Kardashian Sr.

The mom of four celebrated her 40th birthday on Oct. 21 with a trip to a private island with the rest of the Kardashian/Jenner family (minus youngest sister Kylie Jenner) last week. The celebration was met with some pretty extreme responses on social media due to the ongoing coronavirus pandemic, and West's birthday present also garnered some interesting reactions after Kardashian shared it on social media.

On Thursday, Kardashian posted a video of a hologram of her late father speaking to his daughter. The former lawyer and father of six died of esophageal cancer in 2003, but in October 2020 a hologram of him stood on stage and told his daughter, "You look beautiful, just like you did when you were a little girl. I watch over you and your sisters and brother and the kids every day."

The hologram went on to discuss memories Kardashian Sr. shared with his daughter and danced to a song they listened to on the way to school.

"For my birthday, Kanye got me the most thoughtful gift of a lifetime," Kardashian wrote on Twitter. "A special surprise from heaven. A hologram of my dad. It is so lifelike! We watched it over and over, filled with emotion."

Some of Kardashian's celebrity friends responded to the video, like Jennifer Lopez who wrote on Instagram, "Happy birthday. this is beautiful," and stylist Jen Atkin who added, "Omg that’s so incredible Kim."

The View's Meghan McCain, who lost her own father, Sen. John McCain, in 2018, was pretty adamant that she would not want this sort of gift from her husband Ben Domenech "I NEVER WANT THIS! DONT EVER DO THIS FOR ME BEN! FULL STOP!" she tweeted.

Others questioned Kardashian's decision to share the video during a pandemic. "Kim Kardashian getting a hologram of her dead dad while millions of Americans didn’t even get to tell their parents goodbye or go to their funerals thanks to COVID is too on the nose," one critic tweeted.

Another called the video "tone deaf" when so many millions of Americans are struggling right now. "This is so insanely tone deaf it could only come from a f**king Kardashian," they tweeted. "People are starving and being thrown out into the streets. People are dying and some survive but can't afford the bills from the hospital. Some are wishing COVID would take them because of the debt."

Kim Kardashian's birthday gift from her husband might not be everyone's cup of tea, but it certainly seemed to make her happy.