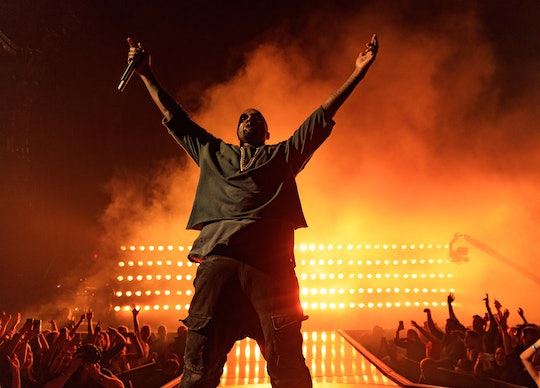 Kanye West's New Album Is Basically All About Mental Health

So far, the studio album Ye is proving to stimulate a lot of conversation, for better or for worse. Kanye West's lyrics on mental health on Ye have caught the attention of media and fans alike. And although it's important to have mental health openly discussed, the issue with Ye is that the album currently leaves a lot to be desired in terms of tackling social issues. So, how does it do when talking about mental health?

West released his eighth studio album at an exclusive listening party in Wyoming. Now available for streaming and download, it hasn't taken fans long to start pulling out notable lyrics. As The Guardian mentioned, this album seems to bear the theme of referencing controversial statements made by West in recent months; from his infamous TMZ interview in which he claimed 400 years of slavery in America "sounds like a choice" to firing back at celebrities who made their own statements after his support of Trump.

In addition to responding to controversy, West takes time on Ye to speak about his struggle with mental illness, namely, bipolar disorder. In fact, the cover for the album itself is an image of a mountain range with the words "I hate being Bi-Polar it's awesome" written across it.

As reported by Vibe Magazine, West shot the album cover pretty last minute. As in, while he was on his way to the listening party.

On "Yikes", the same track containing the controversial Me Too reference, West raps:

Those lyrics have captured the attention of fans, who say that it's inspiring.

However, West's lyrics about bipolar disorder have also been met by criticism. To be clear, no one is actually upset with West for wanting to discuss mental illness. What many find concerning about the lyrics is the fact that this album seems like West's attempts to find redemption or earn back some of the fans he's surely lost. And, as one Twitter user says, mental illness cannot be an excuse for going full MAGA.

In West's case, it's a reference to his his celebration of Donald Trump as his brother and pictures of him wearing the notorious "Make America Great Again" hat.

Along with his controversy surrounding Trump, West made it into the news again after spending $85,000 on Pusha T's album cover. The cover in question was an image of Whitney Houston's drug strewn bathroom. Rolling Stone reported Bobby Brown, who was married to Houston from 1992 to 2007, as saying, "That's really disgusting that he would do that. That's in really bad taste."

It was a sentiment that was picked up across the internet, with some noting the impact that Whitney Houston's race has to play on her treatment, even in death:

West's lyrics around mental illness, and his album in general, have ironic timing given the recent cancellation of ABC's 'Roseanne'. The show was cancelled after Roseanne Barr, series star and creator, tweeted that former Obama aide Valerie Jarrett looked like the offspring of the "Muslim Brotherhood & Planet of the Apes", as reported by Variety.

After the show was cancelled, The New York Times reports Barr explained away her behavior by saying, "It was 2 in the morning and I was ambien tweeting."

Jimmy Kimmel also took to Twitter to say, "angrily attacking a woman who is obviously not well does no good for anyone. Please take a breath and remember that mental health issues are real."

The discussion around Barr's tweet helps illustrate part of the concern surrounding West's lyrics. Mental illnesses exist and they should be spoken about, but only mentioning them when it's convenient to brush away someone's personal accountability is still harmful.

West's support of Trump, his refusal to help Donda's House the Chicago based charity named after his mother (although the nonprofit now has plans to change their name), and his sponsoring of Pusha T's album cover cannot be explained away with a few bars about bipolar disorder.

Some might find West's lyrics personally inspiring and they're free to do that. But, it's worth examining the entirety of the album when taking those lyrics into consideration. And, so far, Ye leaves a lot to be desired.