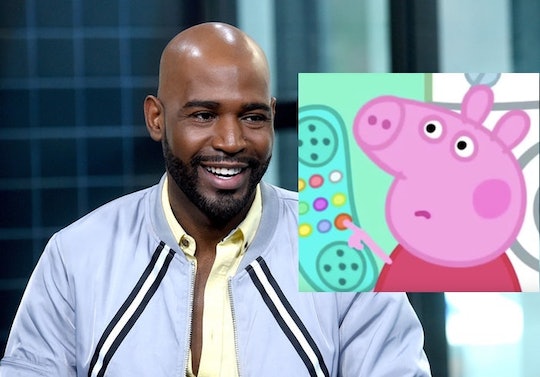 To most children, Peppa Pig is simply an adorable British children's TV show. To internet-dwellers, it's the subject of one of 2018's most iconic memes. And to Karamo Brown, aka Queer Eye's culture expert, there are some adults who could learn a lesson or two from the show. In a recent Instagram post, Karamo Brown dished out some Peppa Pig-inspired life advice, and honestly, I'm feeling inspired.

On Tuesday, Brown shared a one-minute clip from Peppa Pig on Instagram. The clip — which is the same one that went viral earlier this year — begins with Peppa Pig's mom, Mrs. Pig, baking cookies. She invites her daughter to join, but Peppa declines, and asks if she can call her friend Suzy Sheep instead. Once the gals are on the phone, Peppa laments that she is learning to whistle but can't do it yet. Suzy says she doesn't even know what whistling is, to which Peppa replies, "Oh good! I mean, that's sad that you can't whistle, but good, because I can't whistle." After Peppa explains what whistling is, Suzy gives it a whirl, and nails it on the first try. The shot then cuts back to a deadpan Peppa hanging up on her friend.

Alongside the Instagram video, Brown shared his interpretation of Peppa's pettiness and turned it into important life advice/a warning. "Real talk friends, watch out for the #PeppaPigs in your life!" he wrote. "There are people who don’t want to see you win & are jealous when you do! 💁🏾‍♂️🐷."

Thousands of people left comments on the post. Kalen Allen, known for his hilarious reactions to questionable recipe videos, responded: "Lmaooooooooooo this gets me every time!" to which Brown replied: "lol every time! Salty a** people in the world."

"Peppa is so savage, I never realized," wrote another commenter. "Deada** only Karamo would use this for a motivational self love lesson😂😂love you Karamo!" added another.

I've watched this clip before (back when it last went viral in March) but I now realize that I didn't truly understand its ~layers~ until Brown synthesized it for his followers. Nice one, Karamo.

As mentioned above, the Peppa Pig scene has gone viral several times. According to Know Your Meme, the scene first went viral back in 2013, when someone shared the clip on YouTube. Most recently, it went viral again this past March, when a Twitter user shared it along with the caption "I wanted to share this because I LITERALLY DIE EVERY TIME LIKE PEPPA WAS PISSED 😭😭." Another Twitter user then shared a screenshot of Peppa hanging up the phone, captioned, "Make this a meme," according to BuzzFeed. Endless people responded with pretty hilarious situations that might make someone hang up the phone:

So while it's always been clear that Peppa is ~*salty*~, Brown's post is a great reminder that there are selfish people who don’t want to see others succeed, and become envious when they do. Rid your life of toxic friends, y'all!

Also, I love that Brown chose this Peppa Pig video to accompany his advice, even though his kids are definitely a little too old to watch the show on the reg. Brown has two sons, Jason Brown, 21, and Christian Brown, 18, who both live with their dad in Los Angeles, according to Slate. Brown opened up about being a father and how he met his sons in an interview with Parents earlier this year:

I came out at 16 years old as a proud, gay man. My last girlfriend in high school — when I was 15 — became pregnant with my child but did not tell me ... She moved away, and I never had contact with her again.

Ten years later, according to Parents, she sent Brown a subpoena for child support, which is how he found out he had a son. Right away, Brown took full custody of Jason. Shortly after, as he told the publication, Brown found out that Jason had a half-brother named Chris, who he also took legal guardianship of.

And unsurprisingly, Brown's sons are both huge fans of their dad. "He’s a caring and loving person," Jason told Slate. "A genuine guy, honestly." There's no doubt that Jason and Christian have an amazing role model in their father, and it's clear that being a dad has given Karamo Brown an very astute outlook — especially regarding the Peppa Pigs of the world.