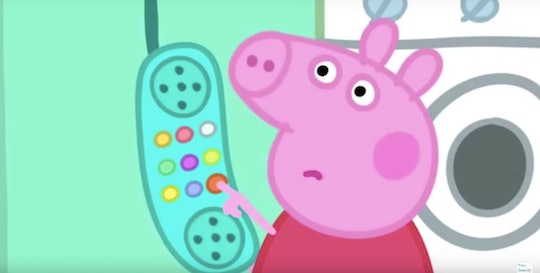 So there's this thing that can sometimes happen when you're a parent and you watch approximately 7,000 hours of children's programming instead of watching old episodes of The Mindy Project on repeat — you get invested. You get really excited about a new episode of Blue's Clues, you feel genuinely engaged by the madcap pup adventures of Chase and Zuma on Paw Patrol... anything to stay sane. And sometimes, folks, sometimes you turn all that focus into comedy gold like these angry Peppa Pig memes which are absolutely my new favorite thing on social media.

For those of you who don't know Peppa Pig, it's a British children's cartoon that began in 2004 about little Peppa Pig, her brother George, and her various animal friends who live in really quite lovely homes like humans. Except the Rabbit family, I guess, although their burrow on the hill is like something out of Anthropologie if they had a forest chic collection. The animals might live in houses, but they still exhibit endearing animal qualities (Peppa and her family snort at the table, for instance).

Peppa struggles with the same issues as most children, as do the rest of the animals, and the show tends to be pretty light fare meant to teach kids social skills. Like how to include your siblings when your friends come over, how to overcome fear, etc. And in one particularly memorable scene that's presently lighting up Twitter, Peppa had to deal with jealousy.

In the episode, Peppa is desperately trying to learn how to whistle. We've all been there and know how it is; you don't get it until you get it. Poor little Peppa is upset and she calls up her best friend, Susie Sheep, to explain her predicament. Susie immediately pulls out the perfect whistle on attempt number one, and Peppa, well, loses it. She goes all bug eyed, and literally just hangs up on her friend, dejected.

And so... a meme was born when Twitter user @sohbaigx put the call out to the hilarious folks of Twitter to make a meme out of Peppa ruthlessly hanging up on Susie Sheep. Who we can only assume is whistling to herself to this day.

It really is the perfect meme to explain a certain kind of irritation.

Like if you get a phone call you would prefer to avoid.

Or even a certain kind of panic, actually. The kind you might get if, say, your mom asked you to clean your room and then called to say she would be home early.

This Peppa Pig meme even covers awkward romantic entanglements. Which is pretty impressive considering it's seriously just a pig with a hairdryer-shaped head hanging up a phone. But honestly? It works so well I can't stand it.

I mean, that obnoxious phone game played by lovers where they both playfully challenge each other to hang up first? Yeah, now there's a seriously accurate meme for that.

And then there's this Peppa Pig meme. I'm just going to go ahead and leave it here because it's simply delightful.

At the end of the day, some might worry that a whistle-challenged pig hanging up on her best friend won't set a good example for the young people of this generation. That being jealous and vain and spiteful are traits we should never really encourage kids to indulge. And sure, I totally agree. Just go ahead, call me up, and give me a lecture about teaching pigs how to be nicer to sheep whilst chatting about whistling on the phone with each other.

I'm ready to listen to your complai-