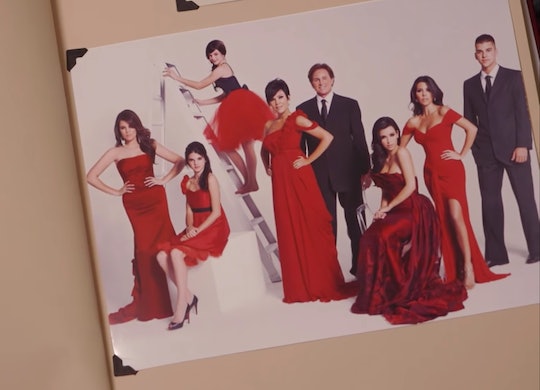 The Kardashian-Jenner family always brings the drama — and one of their most dramatic moments of the past year was the fight about their 2017 Christmas card. So now that the KarJenners' 2018 card is expected to drop sometime this month (if at all), it seems like the perfect time to revisit all that madness, as well as the Kardashian family's Christmas cards over the years.

When the family released its 2017 card on social media last year, fans had no idea just how much tension went into actually making it happen. In August of this year, Season 15 of Keeping Up with the Kardashians premiered on E! In the opening episode, viewers saw the family planning the card, a venture led by Kim. After she made a scheduling change, Kourtney was ticked off, and the disagreement led to a huge fight. “No one wants you in the f*cking shoot. Get the f*ck out of here and go,” Kim told Kourtney on the show repeatedly, quickly escalating to even worse insults. Kourtney was hurt by Kim's comments, but since Kourtney appeared in the final Christmas card, the sisters must have put aside their differences to make it through the shoot.

So now that I've gotten that melodramatic recap out of the way, here are some of the KarJenner family's most fabulous Christmas cards of yore, along with titles I made up for each picture, because I was feeling *inspired*.