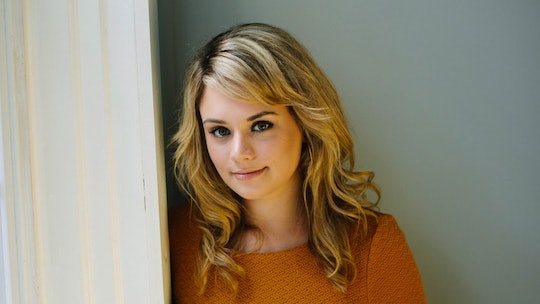 Kate Doesn't Have Regrets About 'Married At First Sight' & Here's Why

Throughout Season 8 of Married at First Sight, it always appears to me like Kate has greeted every new jerk-like behavior of her husband's with a sort of tranquil resignation — almost bemusement. And I wanted to know why. Kate answered a few of my questions via email, but I can't say I feel like I got to the bottom of their relationship. All I can really say is that Kate doesn't regret Married at First Sight, even though it would be pretty understandable if she did. Fans of the show (and fans of Kate) have been extremely, how shall I put it, displeased with how her new husband Luke treated her throughout their time together.

If you're a little lost right now, let me quickly bring you up to speed. On Married at First Sight, couples sign up to be matched with a stranger by a team of experts, who they will then legally wed before all their friends and family the moment they first meet. What could go wrong? In the case of Luke and Kate — plenty.

While the whole thing is awkward for reasons that should be obvious, most couples on the show seem to make a real effort from the get-go to be affectionate and, you know, spouse-ly with their new spouse. Luke, however, made it clear he had no intentions of being physically close to his new wife at all, including everything from kissing to snuggles.

When Luke and Kate finally did kiss, Kate told cameras that Luke responded by saying the kiss made him feel "repulsed and dead inside." When Luke spoke to me, he explained, "what should have sounded like 'I'm not feeling it' came off with maximum harshness due to panic. I was just trying to deescalate an uncomfortable situation and went down in infamy instead." Kate says, "I expected my husband to be more considerate of my feelings and thoughtful in his actions towards me." Yeah. Same.

To be clear, it's not Luke's initial attraction or lack thereof that's the problem here. It's Luke's attitude and behavior toward Kate which worried fans as well as her friends. In another episode on the couples' one-month anniversary, Kate was hoping to spend time with Luke — who woke up early to leave and hang out with his friends without her.

But watching the show, what most struck me about Kate's behavior was a sort of determined optimism, even when her friends and other couples on the show pointed it out Luke's not-so-great behavior towards her.

I tried to be optimistic coming into this process — you have to be when putting faith in letting someone else choose your husband! But my biggest worry was that there would be no initial attraction. Obviously, that did come true, but part of this process is the belief that attraction can grow — and whoever signs up for this has to believe that.

The show hasn't finished airing yet, but I have to hope that Luke and Kate eventually went their separate ways. If nothing else, they are clearly not made for each other. Regardless, Kate says she doesn't regret going on the show. "I want love, and I’m willing to take big risks for it," she says. "I can’t regret going after the things that I want in life." Can I get an amen? Luke or no Luke, I have a feeling Kate is going to be just fine.