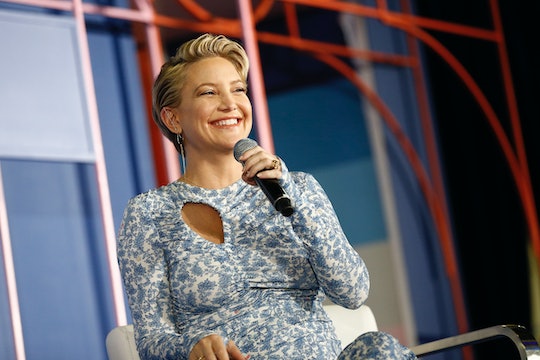 Actress Kate Hudson recently welcomed a baby girl with her partner, Danny Fujikawa, and, given that she's already a mom to two boys, it's reasonable to think that having an infant daughter may feel like unchartered territory, even to a seasoned mom like herself. But based on her comments in a recent interview with AOL, it actually looks like Kate Hudson is taking a "genderless" approach to raising baby Rani, and that, while there may indeed be some differences between her daughter and her older boys, she's still trying not to rush into making any assumptions.

Hudson told AOL's Gibson Johns that her goal, more than anything, was to "raise [her] kids individually," and to just meet them where they were at — after all, even siblings of the same gender can still be wildly different, with a variety of needs. But while that approach is a wise one overall, it also means Hudson and Fujikawa will be able to try to avoid unnecessarily gendering their infant before she's able to figure out who she is. Though Hudson did tell AOL that "right now, [Rani] is incredibly feminine in her energy, her sounds, and her way," ultimately she and Fujikawa "still don’t know what she’s going to identify as," and they want to respect that.

Genderless parenting may still be seen by some as a radical idea, but it's one that actually holds a lot of merit. For one, research has shown that enforcing narrow expectations of gender onto kids can be super harmful, and a 2017 study in the Journal of Adolescent Health found that adolescents raised with strict ideas about gender roles were actually at an increased risk for mental and physical health problems. But that probably shouldn't be much of a surprise: by accepting children for who they are, instead of trying to make them fit into arbitrary ideals about who they should be, it seems only natural they'd end up healthier and happier.

Adopting a more gender-neutral view doesn't have to mean shunning he or she pronouns, though, or forbidding the idea of "girl" and "boy" entirely. Instead, it can simply be a matter of keeping an open mind: as Hudson told AOL, she does find it much more fun to dress Rani up than she did with her sons, and her Instagram account shows she's happy to dress her infant up in pink. But infants, in general, already tend to be gender-neutral, and as Rani inevitably gets older and starts to show her own preferences and comfort level, it sounds like Hudson and Fujikawa will be more than happy to follow her lead.

Hudson isn't the first celebrity mom to come out in favor of trying to raise her kids without rigid confines of gender though. In December, singer Pink revealed that she and husband Carey Hart are attempting to raise their two kids in a "label-less household," and that they try to take an open-minded approach to things like gender and sexual orientation. Pink told The Mirror,

We are a very label-less household. Last week Willow told me she is going to marry an African woman. I was like: 'Great, can you teach me how to make African food?' And she’s like: 'Sure mama, and we are going to live with you while our house is getting ready.'

Unfortunately, not everyone is on-board with that view, and Pink did have to endure some backlash over her comments. But, even with the criticism, it seems Pink is definitely doing her kids a huge favor. Although it's certainly hard to avoid gender norms and stereotypes (the popularity of pink-and-blue themed sex reveal parties show, for example, that it starts long before the baby actually arrives), it seems like that many any effort to avoid needlessly gendering a child is valuable.

So while it's totally possible that little Rani may grow up to happily be a super-feminine, cis-gendered girly-girl, is also entirely possible that she may identify in a completely different way. And if she does? It sounds pretty clear she'll have the support of her family no matter what.