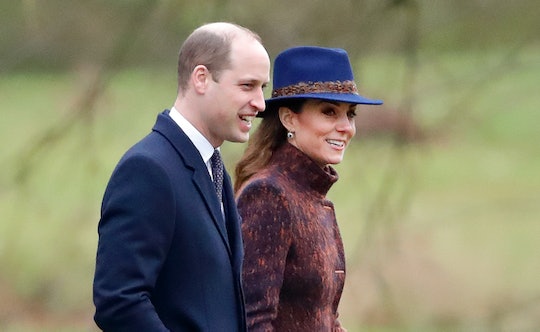 Kate Middleton is a January baby and you know what that means. Yes, she's a Capricorn, but also having a birthday in January usually means you sort of draw the short straw. For most people, it means a lackluster celebration since everyone is broke and partied out. The Duchess of Cambridge is apparently not "most people." As it turns out, Middleton has already celebrated her 38th birthday with a weekend of fun events that included both family and friends, and also the third F which stands for fedora. That's right, she wore a fedora for real because that must be the signal that the party is getting started.

Middleton actually turns 38 on Thursday, Jan. 9, but she has traditionally celebrated the weekend before her birthday as the final hurrah for the royal holiday festivities, according to The Mirror. Which makes sense considering her two older children, 6-year-old Prince George and 4-year-old Princess Charlotte, headed back to Thomas's Battersea School in London on Tuesday.

The Duchess of Cambridge apparently prefers to celebrate her birthday at the country home she shares with husband Prince William in Norfolk County, Anmer Hall. According to People, the Cambridges celebrated her birthday by inviting a bunch of her close friends over to Anmer Hall for a party on the weekend. But don't worry, People reported that Middleton included her family as well. Her parents Carole and Tony Middleton were reportedly on hand and even joined all of the partygoers at church with Queen Elizabeth on Sunday morning at St. Mary Magdalene Church. The same church the royal family traditionally visits every Christmas morning.

It should be noted that Middleton wore the fedora to church, which felt like more of a party hat than she usually sports. This bodes well for her birthday celebrations, I think. Much like most mothers, Middleton's birthday celebrations have changed dramatically since getting married in 2011 and welcoming her children. Back in her 20s when she was dating Prince William, she was seen hitting the clubs to celebrate her birthday with friends and her sister Pippa Middleton.

These days, however, things have changed. I mean, one of the guests at her birthday celebrations was actually a teacher at her kids' school, Lucy Lanigan-O’Keeffe, who is engaged to one of Prince William's oldest friends Thomas van Straubenzee, as the Sunday Independent reported. Such is the way of being a mom, I guess.

Kate Middleton certainly doesn't look like she minds celebrating her birthday at her home with friends instead of going out to a nightclub. On the contrary, when she was at church on Sunday morning surrounded by family and friends she looked content and happy. HBD, Duchess Kate!