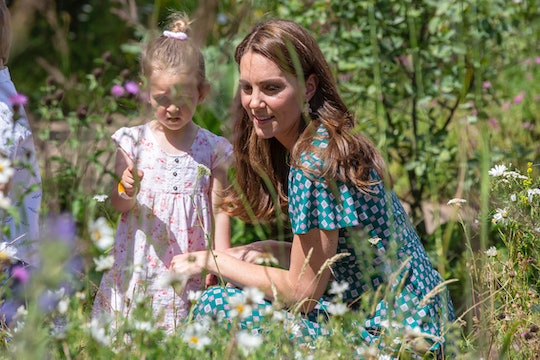 Ever since Kate Middleton became the Duchess of Cambridge (and presumptive future Queen of England alongside her husband, Prince William) back in 2011, she has lived constantly in the public eye. And as something of a royal watcher, I can tell you she gives the impression of ease and grace under pressure. Always smiling an actual genuine smile, always with that glossy hair and some sort of amazing dress. But here's the thing: it's all a bit of a facade. In fact, it seems she, too, struggles with pressure, which is perhaps why Kate Middleton comforted a little girl who was feeling shy in the most relatable, most understanding way. Because on some level, she is sometimes that shy girl herself, no matter how effortless she makes her life look to outsiders.

The royal mom of three invited young guests for a tour of the Back to Nature garden she created for the Hampton Court Palace Garden Festival earlier this week, The Telegraph reported. According to Hello! Magazine, Middleton asked children from the Anna Freud Centre, Evelina Children’s Hospital, Action for Children and Place2Be to join her for a treasure hunt and bug finding excursion in the garden in an effort to encourage them to enjoy the outdoors. Now I will pause to acknowledge the Duchess of Cambridge sounds like a whole lot of fun, please.

During this fun day away, one little girl appeared to be struggling with all of the attention, and it did not escape the empathetic mom's notice. According to Hello! Magazine, when 8-year-old Khareesha James was seen standing off to the side, the Duchess of Cambridge apparently took her off to a little tent for a private chat. Young Khareesha told reporters, according to The Telegraph, about their discussion after the fact, sharing: "I am shy and she said that’s where she goes when she’s shy — in a tent."

Adding to that sweetness, Khareesha's mother also explained to reporters, according to Hello! Magazine, that Middleton had been very kind with her daughter... and apparently made her feel a bit better, considering the little girl made a flower pot for the Duchess of Cambridge afterwards.

Middleton understands what it's like to be a shy girl on a deep, personal level. When she was just 13 years old, she transferred to a new posh all-girls school called Downe House where she was allegedly bullied, as royal biographer Katie Nicholl wrote in the book Kate: The Future Queen. The young Middleton was lonely and felt that she stood out from the rest of the "cliquey" group of girls, according to Marie Claire.

"Disappointed not to be part of a team on the sports field and shy compared to some of her more outgoing classmates, Kate retreated into her shell," Nicholl wrote in her book, according to Marie Claire. "She found the all-girl environment alienating and had little in common with many of the wealthy pupils who owned ponies and came from high-society families.

Her parents moved her to a different school after just one year, according to The Sun.

The Duchess of Cambridge might be one of the most famous women on the planet right now, but she clearly hasn't forgotten how difficult it can be to be a shy little girl. To feel left out, at odds with the people around you.

And it's lovely to know that she still feels such strong empathy for other kids that she can shrug off her royal exterior and try to comfort a shy little girl inside a tent.