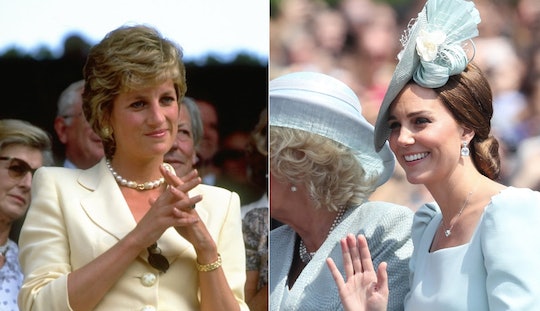 It's always tough to know exactly what you're supposed to call members of the royal family whilst rabidly discussing every detail of their daily lives as we all love to do. Take Kate Middleton, for instance. She is actually Catherine, Duchess of Cambridge, and has been since she married Prince William, Duke of Cambridge, back in 2011. But we still call her Kate Middleton because that's the name we all recognize, I guess. Well, it looks like Kate Middleton could inherit another title, but from Princess Diana in the future, and it's probably going to give people a lot of feelings.

The British monarchy really loves their titles and their rules, it seems, which makes sense considering it's been decades since the 800's when Egbert of Wessex briefly reigned over a united England. So I suppose it makes sense that they have a whole bunch of confusing rules (although that whole thing where the family isn't allowed to play Monopoly is genuinely odd).

When it comes to royal titles, there appears to be a whole new level of confusion, especially as it pertains to people who marry into the family rather being born into it. Kate Middleton and Prince William are not simply the Duchess and Duke of Cambridge, according to Good Housekeeping; they are also the Earl and Countess of Strathearn in Scotland and the Baron and Baroness of Carrickfergus in Ireland.

One title she does not hold? Princess Kate. But that could change in the future.

Get ready to lose your damn minds with this little tidbit; there is no such thing as a person marrying into the royal family and getting "princess" or "prince" before their name, according to Good Housekeeping. Not even Prince William's own mother Diana, who everyone called Princess Di, went by that title before her death in 1997. According to Harper's Bazaar, her official title was Diana, Princess of Wales, because she was married to Prince Charles, who continues to go by the Prince of Wales.

Prince Charles' wife, according to Cosmopolitan, could technically be called Camilla, the Princess of Wales along with the title she uses, the Duchess of Cornwall, but has reportedly avoided this out of respect for Diana's memory.

The Duchess of Cornwall has something of a murky history with Diana, according to USA Today, which could be the reason she has never taken the title that automatically became hers upon marrying the Prince of Wales (and heir to the throne) in 2005. After it was discovered that Charles and Camilla were carrying on an affair, he and Diana divorced in 1995, just two years before she died, according to USA Today.

Which means that Diana remains in the hearts of millions of people as the only Princess of Wales. That is, until the day Prince Charles becomes King of England, according to The Daily Express, and Prince William takes over his father's current title as Prince of Wales. This would make his wife Catherine, Princess of Wales, as Good Housekeeping reported.

And why do I assume people will be bawling their eyes out if this title change happens? I mean, people already go crazy trying to find the similarities between the two women.

According to The Daily Express, it seems likely that Kate Middleton would take on the title of the Princess of Wales. And it seems just as likely that she would serve the title well. Diana's work as a humanitarian helped to make the title Princess of Wales synonymous with good deeds, compassion, and kindness. Kate Middleton is already making great strides in that department with her work in addictions research, mental health awareness, and art therapy for vulnerable children.

It's an emotional thing, thinking of someone else stepping into the historic role of Princess of Wales. But Catherine, Duchess of Cambridge, is definitely up to the task.

Editor's Note: An earlier version of this article read that William the Conqueror was the first King of England. It has since been amended.