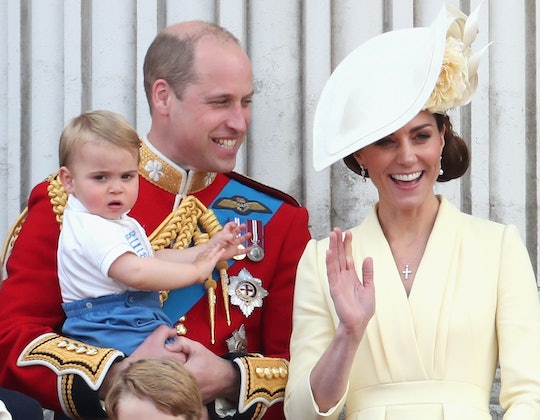 I can't even tell you how much I love saving money. I guess it goes with the whole single mom territory, but I suspect that I would have been all about saving those Benjamins no matter how much money I made. I think being thrifty is either in your blood or it's not, and it's definitely in the blood of the Duchess of Cambridge, this I know for sure. Just recently, in fact, Kate Middleton flew commercial with her kids and Prince William because she's the thrifty mom icon I will bow down to forever, although not because she's royal. We don't do that here.

The Duke and Duchess of Cambridge took their three children, 6-year-old Prince George, 4-year-old Princess Charlotte, and 1-year-old Prince Louis to Balmoral Castle in the Scottish Highlands recently, presumably to visit the Queen, as People reported. The entire royal family is getting set to enjoy a big get-together to end the summer holidays, according to The Telegraph, as has been the tradition for the Windsors ever since Queen Victoria and Prince Albert purchased the home more than 150 years ago.

But instead of taking some sort of private train or plane or helicopter or what have you, the entire Cambridge family of five actually surprised fellow passengers by taking a commercial flight from Norwich, England to Aberdeen, Scotland, the Daily Mail reported. Please imagine sitting on that flight... the shock would do me in, I fear.

It seems the couple flew with economy airline FlyBe, with shocked fellow passengers reporting to The Sun that they saw Prince William carrying the family's luggage with his son Prince George's help as Middleton carried Prince Louis and Princess Charlotte trailed after them. And one passenger told The Sun that very little fuss was made of the future king of England and his family being on the flight: "They weren't harassed by anyone at all as they got off the plane. They just seemed like a family [traveling] together to be honest. No one saw them get on the plane either. It was amazing how they did it."

While the family's trip on an economy plane might seem shocking to some, the fact is that Middleton has been a pretty thrifty gals for years. The mom of three has made handing clothes down for each child an art form, with both Princess Charlotte and Prince Louis seen wearing Prince George's old sweaters and shorts, while Prince George has worn his father's old clothing as well, as The Telegraph reported.

Of course, Queen Elizabeth herself is a notably thrifty woman. In fac, every year at Christmas, according to Town & Country, she travels to Sandringham Estate in Norfolk County by public train, and the family has long held the holiday tradition of small presents rather than glamorous ones to give each other on Christmas Eve.

All this is to say both Kate Middleton and Queen Elizabeth are thrifty icons. Maybe the even clip coupons together, wouldn't that be glorious?