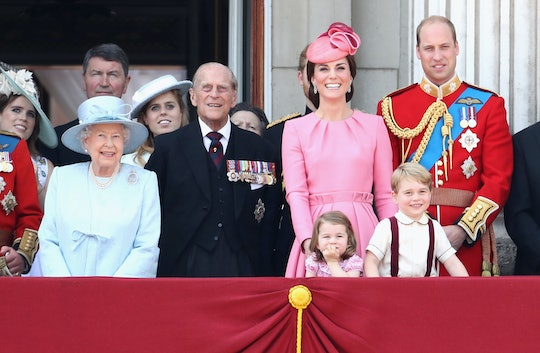 Imagine you're invited to Christmas with the Queen. I know, it sounds amazing, right? Surrounded by the royal family, eating scones that are probably the best scones in the world and drinking tea. Very cool. Until you realize you have to give Her Majesty the Queen of England a Christmas present. Um.... no. It's a predicament Suits actress Meghan Markle will find herself in for the first time this year, and hopefully she will be open to taking tips from the Duchess of Cambridge. Because Kate Middleton gave the Queen the most adorable Christmas present last year, and the Queen reportedly really liked it.

When the royal family retreats to Sandringham estate next week, their time together will be heavily steeped in long-standing royal family traditions. According to royal historian Kate Williams, nothing much has changed at the fabled royal estate, situated about half an hour outside of London, for the past 65 years. Williams explained to the BBC:

It's quite set, it's quite formal. It's looked pretty much the same since the Queen's youth, since the 50s. You arrive when told to arrive... There are quite a lot of different dresses required — change for church, change for dinner.

But that doesn't mean there isn't room for a little heartfelt, homemade sweetness.

Middleton decided that she was going to try her hand at a DIY Christmas gift for the Queen. Because, as she told the BBC, what exactly do you get for the grandmother-in-law who "has everything?" Like, literally everything.

I thought 'I'll make her something which could have gone horribly wrong.

And what exactly did she make the Queen? A batch of chutney from her own grandmother's recipe. Which is just about the most adorable thing ever. What is it about Kate Middleton? She somehow manages to be relatable, sweet, and also proper and elegant? If I didn't love her so much, I would hate her but thankfully we women don't roll like that in 2017.

While Middleton admitted to the BBC that she was "slightly nervous" about giving her grandmother some homemade chutney for Christmas, she said it appeared to be well appreciated, according to Elle UK.

I noticed the next day it was on the table.

Maybe this year she and Meghan Markle can whip up a batch of something together for the Queen to eat as she binge-watches Netflix. And I hope that is a thing that actually happens.

This Christmas will be a particularly special one for the British monarchy. A source close to the royal family told The Daily Express that Kate Middleton and Prince William, along with their two children Prince George and Princess Charlotte, will be hosting Prince Harry and his fiance Meghan Markle at their home in Norfolk over Christmas. The group will travel together back and forth between Norfolk and Sandringham for all of the royal festivities that will be happening there.

Traditionally, the family gets together on Christmas Eve to decorate the tree and exchange present before changing into evening dress for a formal dinner. Then they wake up to filled stockings at the ends of their bed in the morning. Afterwards, the family will attend church together int he local village, greet well-wishers before heading back to the castle for some turkey.

Of course, this year it seems traditions are rather made to be broken. Meghan Markle's appearance at the British royal family's Christmas dinner is unprecedented; in the past, only married royal couples were invited to Christmas at Sandringham.

So maybe this year, Markle will bring something new to the table. Just as Kate Middleton did when she brought her chutney last year. These two women, along with their partners, seem to be ushering in a new era for the royal family.

I can't wait to see what happens next.