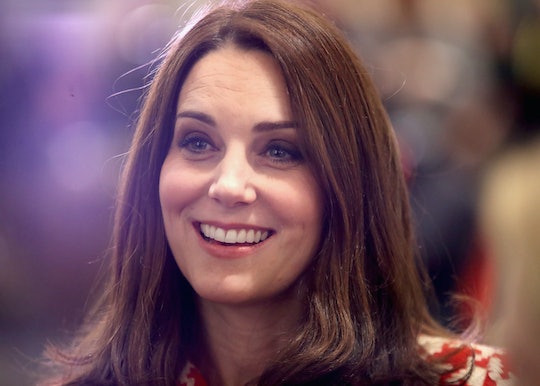 Kate Middleton Gives Birth To Royal Baby No. 3 & The World Is So Thrilled

Was it just me or did it feel like all of our favorite celebs were pregnant this year? Kylie Jenner, Mindy Kaling, and of course, the Duchess of Cambridge, who announced her third pregnancy back in September 2017. On Monday, Kensington Palace announced that Kate Middleton gave birth to a baby boy, and the family is currently resting and enjoying their first days all together.

It continued: "The Queen, The Duke of Edinburgh, The Prince of Wales, The Duchess of Cornwall, Prince Harry and members of both families have been informed and are delighted with the news."

And the internet lit up:

Just after Middleton announced her pregnancy in early fall, the palace released a statement confirming that she was due in April, so the baby arrived right on time without any complications, which is a good thing. Middleton suffered from hyperemesis gravidarum during the beginning of this pregnancy, as well as with her first two pregnancies, and was even hospitalized for it while carrying 2-year-old Princess Charlotte.

This time, too, she had a rough time at the beginning of her pregnancy, but then appeared to feel much better, making public appearances with her husband, Prince Willian, and brother-in-law Prince Harry as well as her almost sister-in-law Meghan Markle. Like so many women everywhere, even without a complicated pregnancy, she has to be relieved that their third baby is here in time for summer. Although the palace hasn't released any pictures yet, it's likely the royal couple will stand outside of the Lindo Wing of the hospital to show off the new addition within the coming hours.

So it's a really busy time for the entire royal family (although, you'd think that the Queen or someone would have spaced out these major life events a little more), which could be a good thing. At an event last year, Middleton spoke about how lonely postpartum life can be at an event raising awareness for the Heads Together campaign, which battles stigma around mental illness and health. She said that being the mom of Prince George and Princess Charlotte has been "rewarding and wonderful," according to People.

But, keeping it real, she admitted that it's hasn't always been a breeze. Even for a princess. She said, according to the publication, "Personally, becoming a mother has been such a rewarding and wonderful experience. However, at times it has also been a huge challenge. Even for me who has support at home that most mothers do not." She added:

Since becoming a mom, the 35-year-old has made celebrating women and health care professionals a priority. This winter, she became a patron of the Royal College of Obstetricians and Gynecologists. She also launched the Nurses Now campaign at the patronage event, saying:

This campaign means a lot to me personally. My great-grandmother and grandmother were both volunteer nurses. They would have learned first-hand from working with the Voluntary Aid Detachment and the Red Cross about the care and compassion that sometimes only nurses can provide.

The hospital where Middleton gave birth — the Lindo Wing of St. Mary's Hospital in London — is sort of a family tradition, as it's the same hospital where Prince William and Prince Harry were born, according to the Daily Mail.

Hopefully the royal couple will release more details — and perhaps even make a public appearance — very soon, because the public needs photos. Congrats, to the whole family!