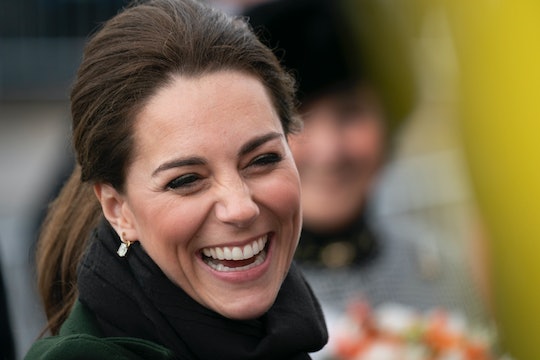 Members of the royal family work hard, especially Prince William and Kate Middleton. Between their countless royal appearances all over the world, to their family duties and raising their kiddos, they deserve to take a break with their three children. And it seems as if royal watchers might have a clue to where they'll travel to next. During a royal appearance on Wednesday, according to Hello! Magazine, Middleton hinted at where she wants to take George, Charlotte, and Louis on their next family vacation, and the destination might surprise you.

On Wednesday, Middleton and Prince William stopped in Blackpool, England, for an official royal appearance, according to Hello! Magazine. Although it was raining when they made their stop, according to The Mirror, and they couldn't make a stop at the famous Blackpool Tower, Middleton was still able to see the beauty in the city and even promised to return with her kids.

After one well wisher asked if she was able to go up to the top of the tower, Middleton hinted that she could be going back to the tower some time in the future to do just that. "Next time, I think," Middleton said, according to Hello! Magazine. "There's so much here the children would love as well. Hopefully next time, we'll bring them back."

To make people even more suspicious, Prince William was gifted candy from Blackpool, called Blackpool Rock, which he said his kids would appreciate, according to People.

If people want to vacation just like the royals, there are some things they need to know about Blackpool, England.

Blackpool sits on the western shore of Northern England, and is famous for quite a few things, most notably the seven miles of sprawling beaches. It's the kind of vacation spot that kids seem to love. It's home to Blackpool Pleasure Beach, a super popular theme park with 10 different rollercoasters, including the United Kingdom's tallest and fastest coaster called "The Big One."

If thrills just aren't your thing, then the Blackpool Tower might be. The Blackpool Tower, which was modeled after the Eiffel Tower and built in 1894, according to Visit England. The 518 foot tower allows people to travel to the top of it and provides the "best views in the North West" of the Irish Sea and those gorgeous beaches.

It's basically every kid's dream getaway, even the kids of the royal family. And a vacation to a place like Blackpool sounds like so much fun for 5-year-old Prince George, 3-year-old Princess Charlotte, and 11-month-old Prince Louis. I mean, wouldn't you want to spend your summer vacation going on rides, going to the beach, and playing with arcade games?

This wouldn't be a far cry from where the royal family has vacationed in the past. Last summer, Middleton and Prince William had a very low key vacation at Anmer Hall, their "vacation house" in the country, in addition to traveling to Mustique, a private island in the Caribbean, in July, according to Observer.

It really doesn't seem like the Prince William and Middleton are too picky about where they vacation, just as long as they're spending time with their super cute family. And Blackpool sounds like the perfect town for them to take a vacation in once the weather gets a bit nicer.