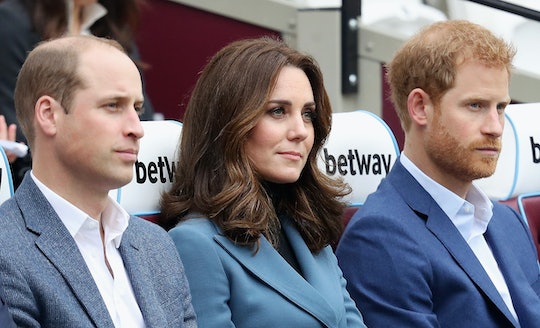 Kate Middleton Is Hiring For A Maternity-Related Reason, & This Is Not A Drill

If you've ever wondered what it might be like, working for the British Royals, you might have your chance. Prince William, Prince Harry, and Kate Middleton are hiring, and this is seriously not a drill. Time to update the resume and pull together a Duchess of Cambridge-worthy interview outfit, because someone has to get the job. And it very well could be you.

According to the official job posting on the Prince of Wales and Duchess of Cambridge website, all three of the coolest royals are looking for a Senior Communications Officer to cover a maternity contract. The job listing reads in part:

We require a Senior Communications Officer to support the work TRH The Duke and Duchess of Cambridge and HRH Prince Henry of Wales on a Maternity Cover contract. This role will work both reactively and proactively to manage the daily news flow to the media, communicating with audiences via traditional, digital and social media.

So you all know what this means, don't you? The lucky recipient of the job (who will be expected to work 37.5 hours per week) will be responsible for managing the daily news the rest of the world voraciously gobbles up about the royals. So basically, the Senior Communications Officer will be a media god. With tea and crumpets on the side.

The applicant description doesn't give much detail, which I take to mean there is a little wiggle room in there for people with personality plus.

Applicants must have extensive experience within communications, marketing or media, with a relevant degree (or equivalent qualification). The ability to make decisions, using integrity and judgment whilst exercising caution is also an essential requisite for the job, as is the ability to handle sensitive information with tact and discretion at all times.

In other words, if His Royal Highness Prince William poses for a picture with, let's say, a giant stuffed bear, the successful applicant would be the person to share that glorious image with the rest of the world.

The applicant will also be responsible for taking the "lead on communications plans and the delivery of engagements and overseas tours." One can only assume that contact with the best of the royals, Prince Harry, Prince William, and Princess Kate (not to mention the potential up close viewing of pint-sized Prince George and Princess Charlotte) will be a possibility. And let's not forget the impending royal, baby number three due to arrive in April. Imagine being the person in charge of releasing that information to the public. The power!

Wondering how to get a leg up against the other applicants all salivating at the opportunity? First, probably keep the salivating to a minimum whence arriving at Kensington Palace (if that's where the interviews are being held; I have no privileged information). Maybe brush up on your royal knowledge by following the official Kensington Palace Instagram and Twitter feed, as if you weren't already watching it obsessively.

Also, it might not be the worst thing in the world to brush up on the official etiquette rules for dealing with members of the monarchy. I suspect the three cool royals (Harry, William, and Kate obviously) are probably not sticklers for curtsies ad such, but the Queen strikes me as a different kettle of fish altogether.

In fact, I suspect just writing those words has taken me out of the running.

If you think you can handle being the Senior Communications Officer, you might want to hop to it. The job posting closes on Oct. 26, which leaves you just five days to memorize everything that's ever been written about the royal family and also brush up on your media savvy.

Chin chin, all. Best of luck!