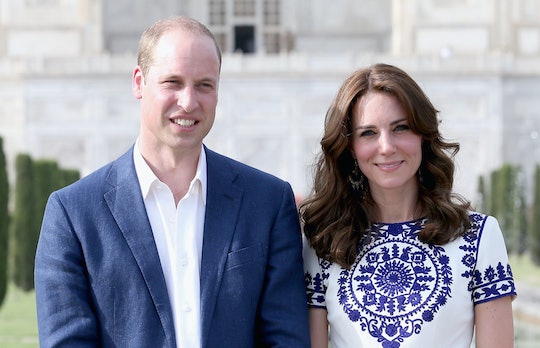 Sounds Like Kate Middleton, Prince William & The Kids Are Taking A Luxurious Vacation

It can be tough to figure out what to do for summer holiday with the kids. Sure, it's nice to try something new but there's also something to be said for the tried-and-true plans everyone seems to love. Prince William and Kate Middleton are apparently students of the tried-and-true school of thought, especially when it comes to their kids. Perhaps because their lives are so busy with royal duties, the couple are reportedly "creatures of habit," according to the The Sun. So when they are trying to figure out their summer downtime away from the palace, Kate Middleton and Prince William's summer plans with their kids will reportedly be a repeat, but the repeat is pretty spectacular, so I'm fairly certain the Cambridge children won't mind.

The Duke and Duchess of Cambridge have been highly visible with royal duties lately. Middleton is the patron of All England Club, according to TIME, and was at several matches at Wimbledon wearing several chic ensembles. She was even on hand with sister-in-law Meghan Markle and sister Pippa Middleton to watch Serena Williams play, according to The Daily Express. As for Prince William, he has been busy with charity polo tournaments and hospital visits. So the two are clearly ready for a bit of a break.

And where does the whole Cambridge family want to spend their summer holidays? It seems they are heading back to Mustique, according to The Sun, a beautiful private island in the Caribbean archipelago of St. Vincent and the Grenadines.

According to The Sun, Middleton and her husband reportedly plan on taking their three children, 5-year-old Prince George, 4-year-old Princess Charlotte, and 1-year-old Prince Louis, back to the island where they spent their summer holidays in 2018. Last year, according to Town & Country, they visited with Middletons family, including parents Carole and Michael Middleton. And a royal source told The Sun they loved it so much they are planning to return in 2019 because it's "incredibly private and incredibly discreet but not remote," and it's a favorite among the Middleton family.

The island of Mustique might be a glamorous island where Mick Jagger and Prince William's great-aunt Princess Margaret have been spotted (and everyone who watches The Queen knows Margaret was very hip), it's also small and safe. Just 1,400 acres with miles of white sand beaches, it sounds like just the sort of place for the royal couple to unwind with their kids.

Last year, Prince George turned 5 years old on the island, while Prince William and Kate Middleton were spotted out enjoying a date night of dancing at Basil Bar, according to Hello! Magazine, perhaps while the grandparents babysat... just like a normal family holiday.

The entire royal family traditionally takes a bit of a break from their duties in July and August, according to People, all of them heading to Balmoral Castle in Scotland with Queen Elizabeth for a group holiday in July, which means the Duke and Duchess of Cambridge might only get a week or so in Mustique.

But a week on that private island sounds to me like it could cure whatever ails you. Here's hoping they have a blast.