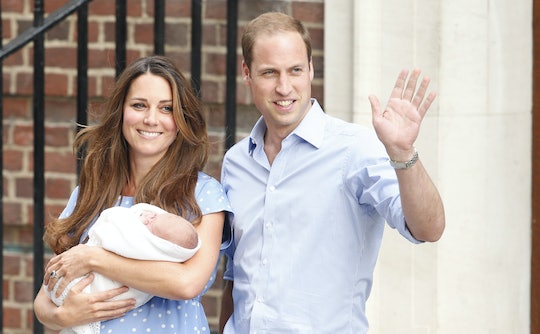 It's a photo most have seen before, a smiling Duchess of Cambridge holding the heir to the throne in her arms hours after his birth. But that iconic picture didn't tell the whole story, as Kate Middleton revealed posing with Prince George outside the Lindo Wing was "terrifying," perhaps more so than many people realized.

Middleton was already well acquainted with the difficulties of royal life by the time she welcomed her first son, Prince George, on July 22, 2013. She dated her husband, Prince William, for several years before they married in April 2011 and had spent a significant amount of that time dealing with media attention. She was even given the nickname "Waity Katie" by members of the press, alluding to their long courtship. While Middleton might have come to terms with the media attention that goes along with her new life, being greeted by members of the press just hours after giving birth for the first time was difficult for her. Not just difficult, as she told the Happy Mum, Happy Baby podcast in a recent interview with Giovanna Fletcher, it was "slightly terrifying."

Middleton gave birth to her first child in the Lindo Wing at St. Mary's Hospital in London, where the late Princess Diana had given birth to Prince William. She admitted on the podcast that she knew her baby would be of keen interest for the British public and was grateful for the "support."

"Everyone had been so supportive and both William and I were really conscious that this was something that everyone was excited about, and we’re hugely grateful for the support that the public has shown us," she said, "and actually for us to be able to share that joy and appreciation with the public I felt was really important."

Despite her gratitude for all the support, Middleton said she felt a bit uneasy about the traditional photo call of royal mothers with their new babies on the hospital steps. "It was coupled with a newborn baby, and inexperienced parents, and the uncertainty of what that held," she said, "so there were all sorts of mixed emotions."

Prince George's birth would not be the last time the Duchess of Cambridge stood on the steps of St. Mary's Hospital hours after giving birth, of course. She went through the same with Princess Charlotte in May 2015 and Prince Louis in April 2018. And each time her postpartum body was discussed ad nauseam in the media, even criticized for looking too perfect.

Middleton has come a long way since she welcomed her first child in 2013. Where she was once known as someone who was a bit quiet and shy, motherhood seems to have brought out something new in her. A forthrightness, a need to "tell the truth," as she said in the interview. Middleton spoke on this podcast as part of her "5 Big Questions" mental health campaign and wants other moms to reach out and be honest about their struggles, too.