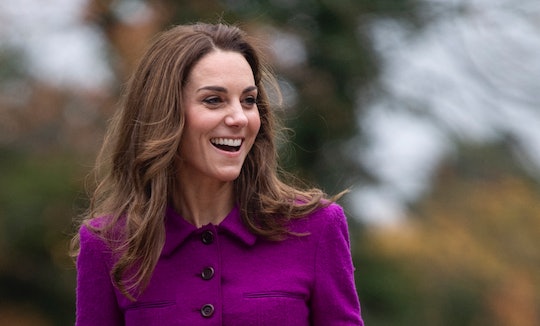 Kate Middleton Says Charlotte Loves Having Her Hair In Braids

Princess Charlotte might wear a school uniform the majority of the time, but that doesn't mean she can't have fun with her hairstyles. And, according to Kate Middleton, she has a lot of fun switching things up. During a recent royal appearance, Kate Middleton said Charlotte is a fan of this hairstyle — but her hair isn't necessarily long enough to do it.

On Friday Nov. 15, Middleton paid a visit to East Anglia Children's Hospice, or EACH — a charity that means a lot to the mom of three, according to People. The charity was one of her first patronages after getting married to her husband, Prince William and the exact location of where she gave her first royal speech. During her visit, Middleton gave another touching speech and reportedly shared one very interesting detail about her 4-year-old daughter, Princess Charlotte — she loves having her hair in braids.

While meeting with people at EACH, Middleton met with one little girl who had plaits, or braids in their hair, according to a Tweet from The Daily Mail correspondent, Rebecca English. This reminded Middleton of her own daughter. "I love your plaits," Middleton said.

"My little girl Charlotte loves plaits but her hair is only this long so we have to do them at the top," she added.

The frustration is real. I can name dozens of times when I've wanted to do a certain hairstyle, only to find out that there isn't enough hair for the style. Needless to say, it can be a little disappointing. But, at least Middleton is able to give her daughter any kind of braids at all. And I'm sure Princess Charlotte loves that.

But, there have been times where Middleton has been successful with braiding Charlotte's hair. That same month, Charlotte made an appearance at Trooping of the Colour where she wore her hair in two braids, tied in the back with a sweet blue bow. So, it definitely is possible, even if there might have been a little bit of difficulty involved.

Although she might not be able to wear her hair in braids at the moment, it won't be long before it grows. She'll be rocking the braids in no time.