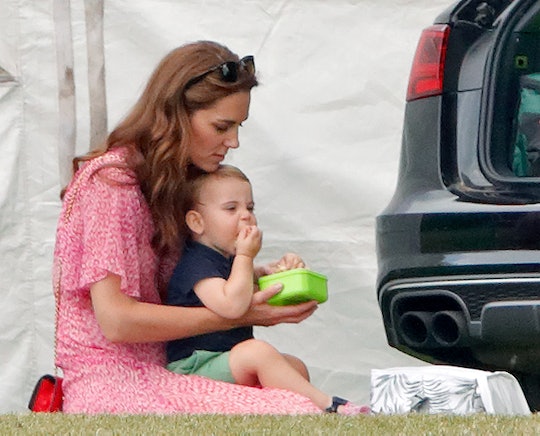 Do you feel like your kids' appetites just get bigger and bigger all the time? Especially during quarantine? You're in good company. The Duchess of Cambridge herself, Kate Middleton, revealed that her kids are "bottomless pits" and they're little royals, so you now know this is clearly a universal parenting dilemma.

Middleton sat down for a candid interview with BBC Breakfast on Tuesday to talk about the national launch of Tiny Happy People, a BBC Education initiative providing support and resources for parents of kids under the age of 4. Middleton has long thrown her charitable support behind children's issues in the United Kingdom, and she explained in her BBC interview that she thinks Tiny Happy People will be able to address "a massive gap before children start school." "It’s that time that I think parents really need the support," she told the news outlet.

Of course, the Duchess of Cambridge is a mother of three herself, so she knows a little something about those early years. The conversation turned to 6-year-old Prince George, 5-year-old Princess Charlotte, and 2-year-old Prince Louis during the interview, and she opened up about what her own life at home looks like these days.

Be prepared, it's not exactly glamorous. As Middleton explained in her discussion with parents during her BBC Breakfast interview, she's having trouble keeping up with her kids' big appetites. "My children have bottomless pits," she told the news outlet. "I feel like a constant feeding machine."

Middleton has spoken previously about how busy she has been with her kids since the family moved to their country home of Anmer Hall in Norfolk County to self-isolate together in March. In April, she spoke to the BBC about the family's "hectic" schedule, outlining what a typical day might look like. "Children have got such stamina. I don't know how, honestly. You get to the end of the day and you write a list of all the things you've done in that day," she told the news outlet. "You've pitched a tent, take the tent down again, cook, bake, you get to the end of the day. They've had a lovely time. It's amazing how much you can cram into one day, that's for sure."

Apparently cooking for the kids is keeping her busy since she referred to herself as a "constant feeding machine." Not to mention trying to ensure her kids follow the physical distancing guidelines, which she admitted in her BBC Breakfast interview is difficult for Prince Louis, in particular. She explained during the interview, "Louis doesn’t understand social distancing. He goes out wanting to cuddle anything, particularly any babies younger than him." This sort of cuteness has to make up for the constant feeding, right?