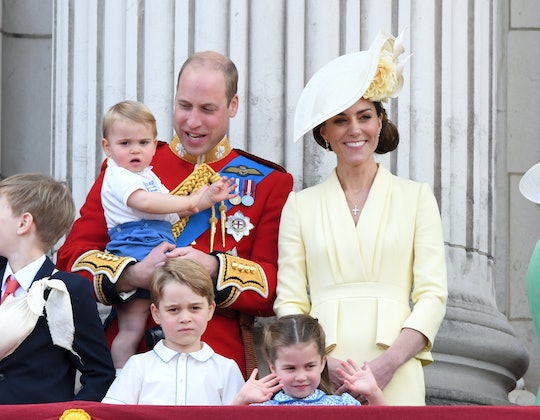 There's just a week left to go until Christmas, but the world has already been gifted an adorable sneak peek at Kate Middleton's family holiday card in 2019 featuring Prince William on a motorcycle and their three children — Prince George, Princess Charlotte, and Prince Louis — looking as cute as can be. And best of all, Prince Louis is rocking some pretty cute overalls in the never-before-seen Cambridge family portrait.

The new photo hasn't been shared on the Duke and Duchess of Cambridge's official social media accounts just yet, but some generous folks on Twitter have shared a photo of the holiday card the family sent in the mail to their well-wishers, according to The Sun. The photo was first shared by Air Commodore Dawn McCafferty, though her tweet has since been deleted.

In the photo, Prince William is sitting on a vintage motorbike with 18-month-old Prince Louis sitting on his lap, wearing the cutest pair of light blue overalls and the silliest expression on his face. A smiling Princess Charlotte is standing on a sidecar, while Prince George looks so grown up in his shorts and navy blue polo. And Middleton, as always, looks incredible, wearing a blue wrap dress.

It's likely that Kensington Palace will share this photo on social media closer to the holidays; after all, Prince William and Middleton have shared their Christmas card photos every year since 2015, Princess Charlotte's first Christmas, according to Good Housekeeping. Last year, the Duke and Duchess of Cambridge shared their holiday card with the public on Dec. 14, so they're just a bit behind schedule in 2019 with an official reveal.

Hopefully they share it on their platforms soon, but don't worry, the Cambridge crew will be making another appearance in honor of the holidays in just a matter of days. On Christmas, Prince George and Princess Charlotte will reportedly join their parents on their walk to church for the first time (Prince Louis is still too young), according to Vanity Fair, and you can bet there will be photographers there to capture the moment.

In the meantime, though, please enjoy this adorable new photo of the Cambridges, and obviously Prince Louis' dungarees.