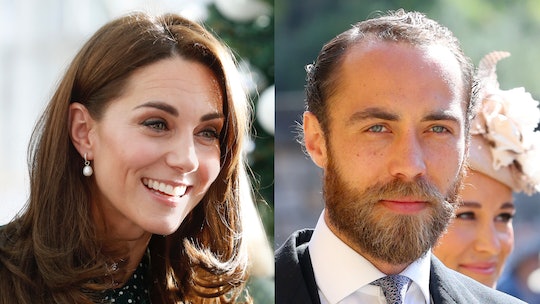 Kate Middleton, Duchess of Cambridge is without a doubt the most famous Middleton sibling. But ever since her brother and sister, James and Pippa, waltzed into the spotlight, the public has had quite the fascination with them both. And now that Kate Middleton's brother James Middleton's Instagram is suddenly public, royal fans are going wild over his posts, which are a mix of dog photos, shots with friends and family, and promotion for his business.

On Thursday, the Daily Mail discovered that James had made his account, @jmidy, public. By Friday morning, his account had nearly 17,000 followers. The page is unverified, but there's plenty of evidence that it belongs to James. For one thing, it's filled with photos of James and his day-to-day life. For another, the first photo was posted back in July 2013, way before he was famous enough to have someone impersonating him on a social media account (let alone a private one).

Fans are pretty excited that they can now keep up with James. "Anyone else consider him their celebrity crush?" one fan commented on James' most recent photo of himself, which is a shot of him at the GQ Man of the Year Awards. "We need more pics of these pups!" another fan commented on a photo of James' dogs (which is a pretty funny demand, considering about half his feed is photos of dogs).

Unfortunately, there don't seem to be any photos with Kate on James' Instagram — which isn't that surprising, actually, considering the royal family's rules regarding social media, as well as the family's efforts to protect everyone's privacy. For example, before marrying Prince Harry, Duke of Sussex, social media-savvy Meghan Markle, Duchess of Sussex deleted her social media accounts and lifestyle blog, The Tig.

But luckily, there are a few photos with James' other older sister, Pippa.

And way back in September 2013, James shared a photo with James Matthews, Pippa Middleton's now-husband.

And as an excited fan pointed out on Twitter, on May 2, 2015, the day Kate gave birth to Princess Charlotte of Cambridge, James posted a photo of himself with champagne. "A little pink champagne to celebrate!" he captioned the adorable solo shot.

As mentioned above, James shares a ton of photos with his dogs — of which he has at least nine, as his Insta would imply. "The ever growing pack," he captioned this shot, along with a paw print emoji.

Over the fall, he posted a shot of a puppy with milk all over its face, declaring that the little cutie was "4 weeks old today."

There's also a video of a puppy bottle feeding.

He even teaches his doggies to swim, or, as he puts it, "doggy paddle."

Not to mention, he uses his dogs for good. On Dec. 31, 2018, he posted a shot of his dog Ella wearing a Pets As Therapy vest. In the caption, he explained that now that she is officially a therapy dog, he plans to share her with others during 2019.

James has posted on Instagram about other animals as well. There's a pretty entertaining video with a musical chicken...

There are a few ducklings...

And there's even the world's cutest lamb.

James' Instagram also makes it clear that he's passionate about his job. He is the "Wonka-in-Chief" (or, more formally, the co-creator) of Boomf, a brand known for making personalized marshmallows with custom photos printed on them, according to its website. He has shared plenty of updates on his Instagram about the company — including that time when Rebel Wilson posted about Boomf.

He has also shared Boomf's business updates with followers. For example, he announced the brand's foray into personalized gift wrap on Instagram.

James has made it clear that he's a hands-on boss, by posting several photos and videos of the Boomf factory.

Royal fans are clearly excited that James is now sharing his life on Instagram. And you never know — casual photos with his sister and her royal kiddos could make it on there at some point.